LAST NIGHT – Crab set a trail from Otto’s Grotto around the foreshore, through Fairway Park, where runners and walkers split. It was a very windy night and runners lost trail near paedophile's paradise (Sacred Heart Primary School). After a bit of searching they all said “fuck Crab,” and returned to the hut at Otto’s Grotto, where Crab insisted trail went through the school grounds, despite a new sign saying it was not a thorough fare and trespassers would be prosecuted, and the rest of the trail must have blown away. We all said “bullshit,” and adjourned for some of the best sausages Crab has ever supplied – pizza and garlic bread.

Crab kept with the Italian theme and also provided Neapolitan ice cream (with crushed nuts) for dessert. In the absence of the lip (Foghorn) and lower lip (Bedpan), Crow usurped Koff’s authority (lower, lower lip) and conducted the lippery. Numerous down downs were administered – none of them for anything worth remembering, apart from Phay Wray visiting from Burnie (with Harley – dog, not bike) in tow. Phay Wray labelled Devonport a “boys club” despite Koff, Tinsel, and Ewe Turn being present, so we told her to show us her tits or fuck off. She did neither, so we gave her a down down, which she complained was too cold and tasted of too much beer (unlike Burnie’s brew, which tastes of too much ginger beer).

The lippery was conducted with the usual volume, which scared Harley, only because the Burnie Hash runs are such quiet and boring events and he wasn’t used to all the excitement. After the lippery, Crow conducted a rigged raffle, handing out junk, prizes gathered on his recent trip to Vanuatu. Unfortunately, the tickets were free, so we couldn’t ask for a refund. However, we decided we should ban hashers from future overseas trips, based on the quality prizes we seem to get when they return.
___________________________________ 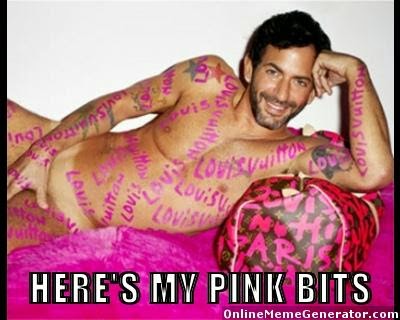 Koff and Dint’s annual (well, it is now because we’ve claimed it) pink themed run. Please wear something pink and encourage as many hashers as possible to attend – all run fees for the night will be donated to the Cancer Council Tasmania. As was the case food will also be themed pink (including half-cooked meat, which will be pink in the middle). If you haven’t seen our pink food before, it’s worth a look - and you can probably look at it again the next day when you bring it back up. On,On – Dint