The Brownlow hosted by Cheese!

The Brownlow run, it was a Faaaq freezing evening, the Hare directing the Runners one way & the Walkers tother:

Cheese received a rowdy here, here for a trail that nooo-one could find, much to the disgust of Cheese.
Some followed hearts & arrows, others followed old H signs, the walkers arrived back to the car park to find Flasher running around in circles, seems as though he didn't even find his way out of the car park!

Back to 33 Amherst to the well guessed menu, savs & pies.  D Bri being vego asked about his cuisine to be told there was a vegi sav somewhere in the pot!!  Luckily for D Bri chicken pies appeared. 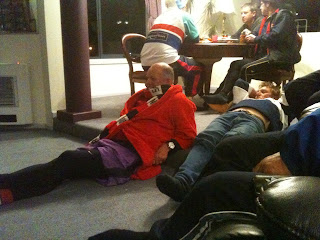 Down downs were light on, not even the Birthday Girl PB received one.
The wrigged raffle was the highlight of the evening the happiest recipient of Pawn we have ever seen went to Tug - say no more!

The excitement was too overwhelming for some :_ Crab was cradling his chocolate coated Teddy Bears!! 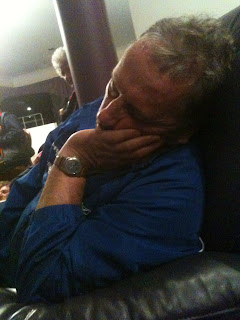 As you can see everyone else could hardly keep there eyes from the screen, De Bri winning the $40 booty from Dint's sweep. 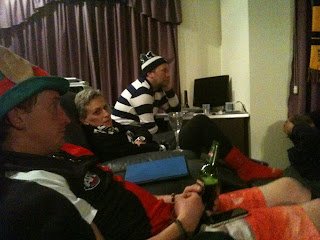 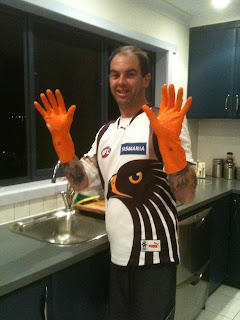 Cheese has one of the tidiest houses ever, & looked the part as the perfect kitchen bitch, although at the site of the almost fluoro orange gloves, "maybe even glow in the dark, eek" the female's took there leave!!!

It will be the Hash celebration for Poxy's up & coming 60th, Birthday Butt Plugs mandatory as are BYO chairs. Poxy & Thrust share the same birth date, so we'll save your down down Thrust!  Promise we won't put dodgy ice cubes in warm beer :)

OnOn
Fanny May
No comments:

Devonport and Burnie Hashers are invited to attend Knickers' 60th birthday celebrations on November 17th. Click on the flyer below to read all about it. 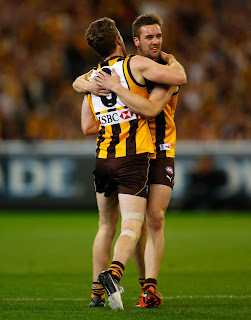 Hi All,
Late notice is better than not at all. Any complaints forward to Web Wanker GA last heard of in Cambodia, even though his passport was soaked & his photo was un-identifiable!!!

6.30pm is the time, Ulverstone Yacht Club is the place to see the pack take off at their usual blistering pace!
Ok I haven't been for awhile!!!

OnOn is at non other than the gloating Cheese's fine establishment at 33 Amherst Street for a night in front of the box for the BrownLow draw or whatever they do.

In addition to the usual grub & raffle money, $2 if you wish to be in the Brownlow sweep thingy!

Even if you aren't interested in footy, take this opportunity to annoy the piss out of Cheese with loud cheering at inappropriate times!!

Oh, there is a theme, wear your footy club colours, it is rumoured if anyone is not in Hawks paraphernalia they won't win any of the outstanding raffle prizes!!