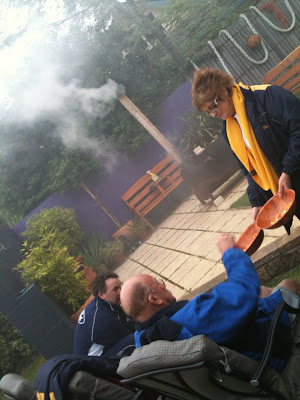 Other important news: Poxy discovered a wasps nest and is smoking out the neighborhood.

PS a new Mismanagement Commitee was democratically appointed by K'off, our new GrandMattress, which included GoneAgain as Marriage Counselor and shock horror Pioneer as the lip. Other surprising positions included Cheese as HashCash as he is low on drinking funds, Mable as OnSec to encourage him to buy a computer and no doubt Mable would have taken note of the positions allocated and will update the Webwanker with all the 'chosen ones', and faithfully write a weekly trash for us.

Even Ringo was worried about the late start to this week's combined DH3 LoonR R*n. Maybe he was afraid he might miss out on his Pub meal if we didn't make it back on time. Luckily Dint had been very restrained and the r*n was quite short, looping around the prettier areas of East Devonport and finishing with a stroll past the local zoo. (what's that you say? it's a caravan park?)

Soon the sizeable pack was back and loitering outside the lovely old church, wondering where the Launceston contingent had got to. It's not too hard to work out that they would be at the nearest pub. Poor Hash Pash had drawn the short straw again and was Des, and there was no flashing Fanny May to make it worthwhile!

The Edgewater's dining area was soon vacated to accommodate the rowdy pack, and stand-in wraffle wriggers Dini and Cheese terrorised the hearts and wallets while the meals were prepared. PB showed off her new Hash Tattoo which has a subliminal message for Poxy - I feel it may be too subtle.

Hash circle returned to Church Street where Hare Lip Dint let the power go to his mouth. Lots of downs and good fire kept the Loons out quite late. The moon hid itself behind the clouds, but when the other moons came out they lit up the entire street.
Next week's run November 29th@ 6.30pm is the AGM from Poxy and PB's place, 3 Eugene Street Devonport.
On On Dini

And Here's a Picture of Them Doing it, Children...

For the three of you who read the blog and noticed the pictures would not appear, here they are! Silly me, I forgot to dance naked and spread the chicken entrails around the computer before I pushed the "publish" button...

Bridge over the River Mabel

A river came between the run and the on on, but luckily Eagle and Mabel had arranged for there to be a bridge, built quite some time ago. They must have been planning this run for a while. Eagle was attacked by a fierce dog whilst setting, but this didn't stop him laying a marathon of hills for the runners, with a few rabbit holes chucked in for good measure. The walkers got a fair look at the railway line and a bit of park, and everyone collided at the Berrigan Road shops for a mastercheck. It was on home from there by whatever means you chose.

The on on crossed the bridge to Eagle's place and after several beers and a few little dicks, Mabel looked quite impressive as the lip. Downs for the hares, Lantern for mud-surfing, Dint for fish-tailing and for so many other things he had to have the Hub as well. After a good feed the raffle was drawn. It must have been immaculate conception that saw Foghorn win a prize without even having a ticket. Also in the prize bag were some hot watches, some cold biros, and some absolutely frigid Porn which Fanny May won. The lads had her convinced it was good family entertainment and are pictured here reading the cover and not looking at the pictures.

Gone to the Dogs

Some made like a train, but Soff convinced them to hash back along the beachfront. It was a clear and crisp evening and the walk by the pounding surf was refreshing, even if the rolly rocks made it hard going underfoot. The walking pack gathered briefly at the seaside church to pray for world peace, free dog food and more beer. On home by various means - railway, grass and through the back of the old motel and onto the streets.