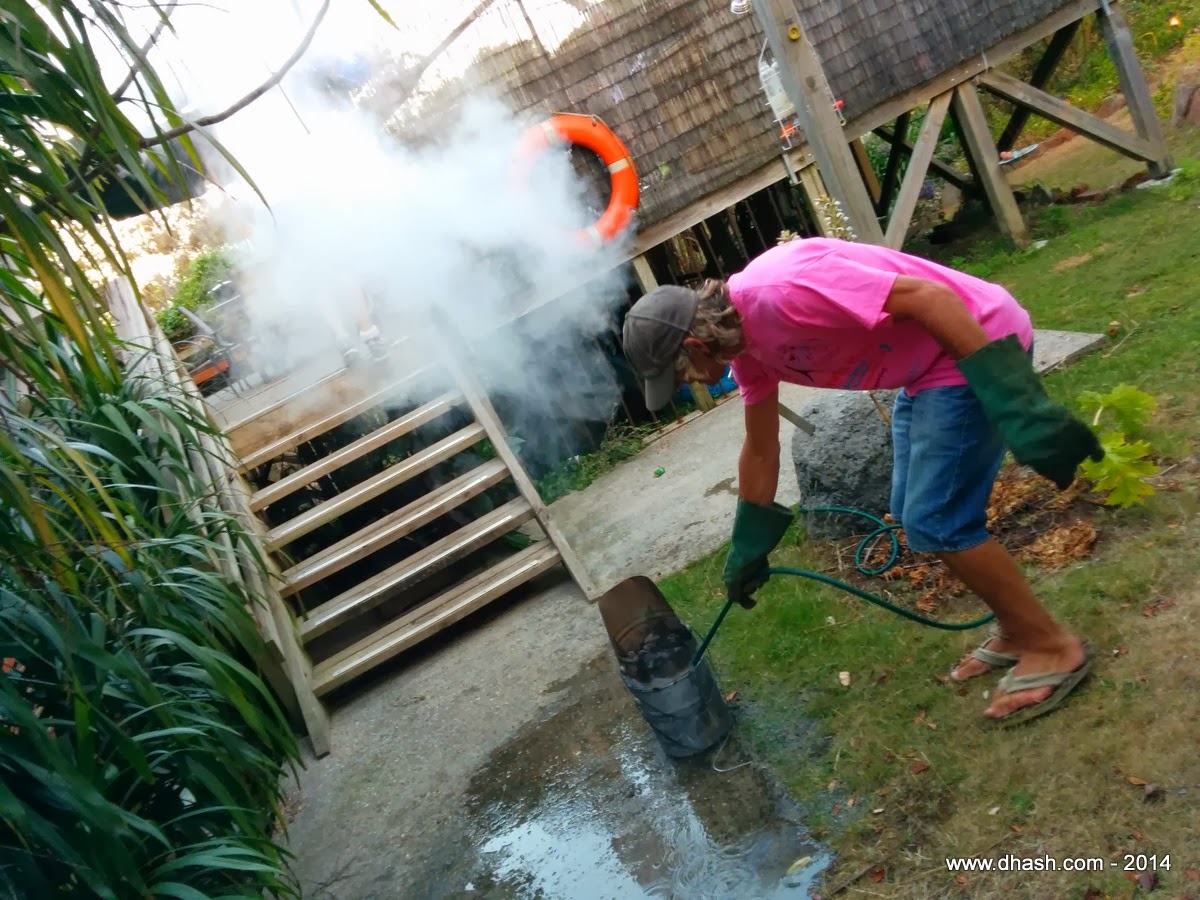 
When everyone had disappeared it turned out all the real men were still discussing the merits of a global lizard invasion in the man-cave downstairs where TF had his first prototype of the self-replicating pneumatic hydromatic invasive mechanical hybrid lizard.
. His other creations were hiding in the attic as they weren't save to turn on with strange humans like us.
And the next run (630pm on Monday 3 March 2014) is set by GoneAgain from Moorland Beach, turn left at the old and now abandoned pulp mill, past the Devonport airport. If you can find the see from the beach, and could be bothered walking the hundreds of meters across it you can swim! Prepare for sharks, snakes and sand-flies. Fortunately the On-On is at FM's save haven at 10 James Street in town. Watch the guard dog, don't step on her! Oh, BYO Spa.
1 comment:

No Costumes and Hot Tub

Since everyone survived the dog-eat-dog run from Soff's place last week, and survived Judy's gourmet kebab and apetisers there is a run scheduled for tonight!

Come to Truck F@ckers and High Beam's place at 23 Taroona Street in Hawley Beach for this weeks gourmet exercise at 630pm. Tropical temperatures should make this a tropical themed On-On, especially with the backyard cool hot-tub. High Beam hasn't thought of costumes, so just bring a towel if you want to get wet. Don't feed the dogs as High Beam has only catered for 35 guests. 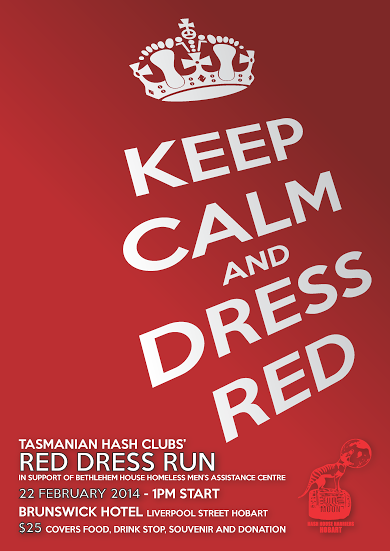 You read it right. Keep calm and Dress Red!
22 February, 1pm start from the Brunswick Hotel, Liverpool Street, Hobart. $25. Be there!

Looking for something to do this weekend? Launy Hash has their Golconda 2 weekend (North of Launy). Catering for binge drinkers. Note: Dogs not welcome :( 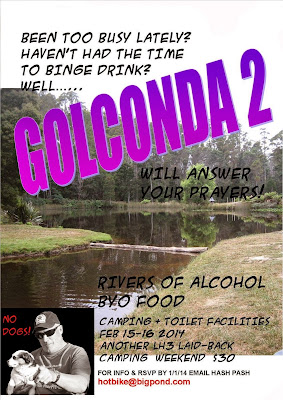 Bald Eagle set his run from the boat ramp past High Tide from where we meandered into town along the new bike path, up the hill in Miandetta and down through the scrubbery across the railway line and back to where we started.
Thrust made a cameo appearance for the run, TruckFucker came along and GoneAgain had a clandestine stop at the KitKat cafe before making his way to the OnOn at Eagle's Nest.  The pack decided we start paying $15/run to cover the bills. The Rigged Raffle will be thrown in as a bonus if we're unlucky.

Anyways, food was fine, we all got down downs from Sub sub sub sub lip Lantern who did as he pleased, taking advantage of the respect we usually show to the lip.

Next run at Soff's place in Turners Beach: 40 Turners Beach Esplanade 630pm. Bring a pressie for the birfdayboy who will be standing on his head to make 99.

As I will be away for a couple of Mondays, I thought I should let everyone know the upcoming runs.


Thank you to all the recent hares. We have had some great trails and on-ons.

Please note that it was decide last Monday night to increase the “run” cost to $15 and do away with the raffle. This will happen from and including the run on the 3rd March.

On On at Harley Court (Pistol Pete’s Place).

Last Monday night’s Australia Day Run was set by a genius. Foghorn had runners toddling off in the opposite direction to the walkers but all arrived back at the same time. Some would say it was pure f-less farse.

In keeping with the tone of the event, Master Checks were astutely located on top of Australian road-kill.

The on-on was a master piece of culinary achievement topped off with Foggy’s home-made lamingtons.