Last weeks run was everything pink!  Some were a little more Pink than others, Flasher tried to tell us he'd bought the outfit just for Pink Ribbon Day, hmm!!!!! 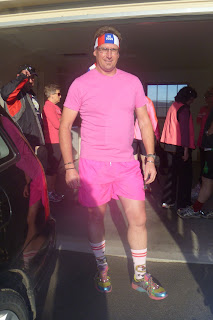 By the time the Slippery Lippery was completed, Wrigged Raffle was won & lost, the Hash Grub was FINALLLY served, the pack literally fell over each other jostling for the best position.   Dyke excelled with Curried Sausages, Lasagne, Mash, Garlic Bread, topped off with a delightful array of non fattening deserts:)  All pinkish of course (natural colouring)!!!

UFO was seen trying to rein her raffle prize in:- Both last seen trotting down the lane!! 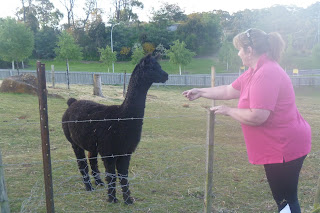 Monday 22nd run was set by Hare Tracka from Maggies. What a fine Run/Walk it was.  I think Tracka missed his calling as an engineer as he is attracted to railway tracks, dual highways & roundabouts, oops & another dual lane highway.

The walkers were elated to have the company of the broken wing Eagle, forget Hashings, (wash you mouth out or Eagle will) so we dutifully complied to aforesaid challenges +++  Tinsel & Fanny Mays bladders were at bursting point after an hour, but struggled on (with a silent challenge to whom had the better pelvic floor muscles) with a race at the finish to la toilet!!!

Maggie excelled himself with potato/cheese mash & sausage casserole which no doubt he is still eating.

Ablie & Christie took the limelight with their puppy ways, photo's to follow at some stage.  Albie was sent to the bird cage!!!!

Monies taken will be donated to Pink Ribbon Day.

Faithful and loving companion of Fanny May and Gone Again.
A fine little Hash Hound, Mouse was always in our hearts and never under our feet.
Gone to r*n with the pack at Cloud Nine Hash.

In my absence last week, PB was my trusty secretary & a fine job!!!  Nothing wrong with brown nosing if I want a lift to Hash, tee hee.

Gardy set an inspiring run from his much loved venue. Hence taking his downdown graciously. Thank goodness I wasn't there as Hash has become somewhat competitive, I'm hoping the inventor of this nonsense received a rowdy downdown.

The new Hasher "Porridge" Tandem's son won a box of chocolates for the runners, coming in closest to his estimated time.
A Bit of This taking the trophy for the walkers.

REMINDER:  Burnie 10 this weekend.  I believe a bevy of Hashers have been working very hard decorating Ringo's Ranch & making final arrangements.  They need to know if you'll be there for catering!
Good luck Burnie Hash :)

Hash 8/10/12 set by Tracka was memorable, well at least for Bald Eagle, who now has to fly tandem for a number of weeks!!!!!

Hash Grub was also memorable, Tracka failed to burn sausages, & Tinsel served up not 1 but 2 Apple Crumbles, that were scoffed without even a burp, well maybe one or two :) 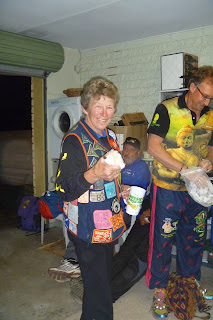 Welcome back to Devonport Hash:- A Bit of This:- 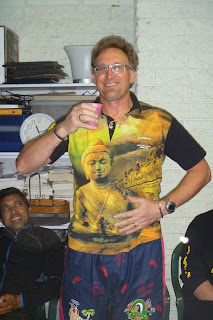 Nuff of that, so we don't end up with a duck show like last week, GoneAgain has given my his proxy as Joint Master "until 6th November". Sooooooooo after some DISCUSSION, about Christmas venues for our Christmas Dinner.

Molly Malones & The Bridge Forth, for Monday 17th December, the very last order for a meal to be placed by 7.45pm at either establishment, they both know we are Hashers & we are very welcome, but don't want the place totally trashed :)

Forth don't usually open Monday nights for counter meals, but for a large number, i.e. approx. 35 they will!

Some made mention about East Devonport Yacht club, as a private function, I can follow this up if you wish? Many wanted Hash to also supply a bus, I'll leave that to other Joint Master Maggie :) Lantern may be able to help for small numbers.

OK you've something to think about, before Monday night & Burnie Hash, Sunday pm.

Where: The Don Hall – Don

What:    THE AMAZING disc RACE

Be early to register before start!!

PS       The report from the IEI (Injured Eagle Infirmary) is that he has two breaks in his right wing and will not be flying for some time. Anyway, he finished up getting plastered last Monday night. Contact with the RSPCA has initiated a do not call roster!!!!

Last Mondays Hash was set by Hare Poxy who was in fine birthday spirits handing out Willies Kentish Ale on arrival (last of the Grandfinal Keg).  Hash Grub from PB, at last some real sausages & hambuggers from the 4way butcher, (v noice)  an independent butcher worthy of patronage - no I'm not related!

Can't Stop from South bestowed us with his presence & received 2 down downs, 1 for turning up, the other for not sure of trail & mentioning out loud I'll just follow that "old bastard" poor Maggie :(

We have a new Hasher (we're sure she's an alias) as she managed to win/steal/cheat/acquire, yes 4 prizes all in that order, um, garden ornaments, other Hashers prizes, etc. etc.  Read an extract from Hash songs about how she loved Cock, recited with 100% passion & gestures, the men "Mesmerised".  Here's too BedPan a worthy Hasher.

FannyMay luckily made 2 Birthday cakes, thinking 2 birthdays, was duly given a downdown, as there were in fact 4, Happy Fuck You B'days, to Tracka, Pioneer, PB & Poxy.