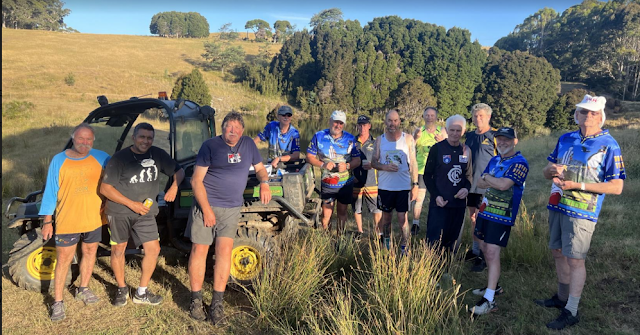 Present -  Bald Eagle, Cheese, Crab, Crow, Debrie, Dint, F.C., Flasher, Guardsvan, Killer, Lantern, Maggie, Seize Her.
A fine retinue of hashers turned up to F.C.’s for the first run of the New Year. As expected the numbers suffered from post-Christmas and NY commitments. F. had spent considerable time cooking and that seemed to work ok as there was little left (either hungry or under-catered).
The run started at 190 and headed North with a M.C. at F’s Wallaby contract killer’s dog kennels where his well-looked-after hunting dogs resided. Of course, Dint (the resident expert on everything) took exception at the tethering arrangements – but what more would I expect!
A P.S. near the farm dams with a Run/Walk ON Home option followed. The P.S. involved a limited bar as one could reasonably expect. Several “runners” took the Walk option and that is entirely understandable.
Back at the ranch F. started proceedings with his inimitable Carrot and Potato soup and the runners soon caught up and fitted in. The next course involved beef (sausage) bourgeon. The Bridgewater scallop approach seemed acceptable and was cost-efficient for hash. The usual loud drivel ensued.
Van came in for some attention for chalking up another year despite ominous predictions. Guardy no longer buys green bananas! Crow’s rigged raffle ensured that F.C. won the Port – which was shared with hashers. F. was a little concerned when he lost his grip on his phone but Cheese was there to help – Bastard! Cheese deserved an award for his admission that he would relish the perving opportunity from Plunger’s new house! Flasher’s fine lippery due to Gyno’s absence.
Downs for: Guardsvan (survivor) F.C. (Hare) Cheese (870 runs) Crab (320 runs) Crow (1,160 runs) F.C. (980 runs) Flasher (770 runs) Killer (383 runs) Debrie (best on ground)
Debrie (God bless him) had to have a little rest on F.’s collapsible table which he proceeded to collapse along with the Port and various loose items. A truly exceptional effort!
NEXT RUN: Mon. 16th Jan 2023Yep 18 Main Rd Penguin [2147] NEXT +1: Mon. 23rd Jan 2023 Seize Her TBA [2148]
No comments: