GA and Fanny May setting next run on Monday 2 March from 10 James Street, Devonport. 6.30pm for 6.45pm start. It will be the last time you see GA & Swordy for 4 months, & a few long weeks for TripleTop & EweTurn & maybe a little for Thrust ! Come & say Fuck off...

Bring plenty of Cash to make sure they actually leave.
www.coughing4cf.com
www.facebook.com/coughing4cf 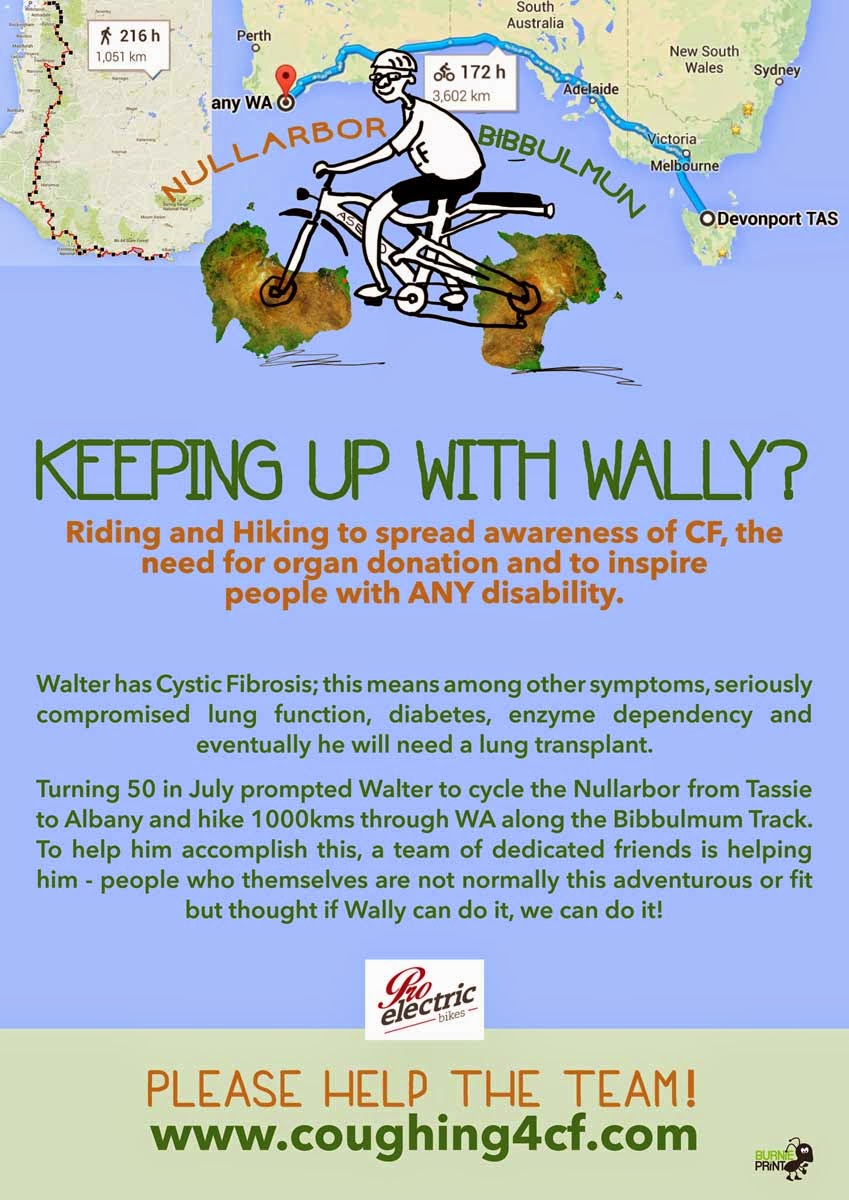 As you would expect, for a run in a new territory, the regular late comers were more than late - one would expect that Thrust and Dint would make allowances for travelling to a virgin run, but not. That's their problem! The signage was good.

Boner, not having set a run before (he had help when we had On On's at his previous places),  sort my assistance as Trailmaster earlier in the week to pass on the finer details of setting a trail.

And what a trail he set. Must have been about 2kgs of flour up and down following the Leven River for a little while, then up this great big hill. Did I forget to mention that we had a drinks stop by the river around this lovely picnic setting - the tide was in so it was pretty special. (Thank Bruce - those that watch 7 will know what I mean).

The runners were sent on their extra special extra distance around and about a quarry and some more really great big hills. As it turned out the wankers and the runners all got back to the On On about the same time. Good one Boner.

So we all gathered around a fire and a BBQ (which was new and not working too well) and eventually  all the red meat was cooked over the fire BBQ and Dint was invited to be the first (needed no reminder).

Dint did the Lip and some of the significant downs were -

. Captain Crab because as the Maggiemobile with Crow and Soff travelled down Reibey Street in Ulverstone to the run - we had to stop because we could not get around this vehicle parked outside the Red Grasshopper at 45 degrees from the footpath. We guess he is getting out cash from the ATM which is better than paying by cheque.  And he calls himself a tour guide. Bloody hell!!!

As it turned out Boner had a brother at the On On as well as his father Geoff and Judy. Mark is now known as Mongrel and Geoff and Judy were fortunate that they did not get named officially. Not too late!

As the Hub did not appear - Tripple Top still continues to have it.

Crow was back and had some tales to tell of his experience at the Royal Hobart Hospital and more so coming back.   It seems he has a leaky heart valve and is now waiting to see what options the Doctors will provide. It is not life threatening!

But all that pales into nothingness when on the way home with 1080 driving, a truck and trailer combination did the wrong thing and another truck nearly wiped them out - the dent behind the rear passengers door on the drivers side on the Subaru shows how close it was.  I think Crow and 1080 were glad to get home!

The raffle was won and lost and lot's of pick me's and so on. Wankers!

Ou thoughts are with Truck Fucker and High Beem, and to Feels on Wheels (Dec) and Trish on their loss of family.

Next weeks run is at Fanny May's and Gone Again's (is he still here?) he is and is looking for some like minded people to travel with him and female hashers  from Melbourne to WA on bicyles with some assistance from battery power. He will need that! 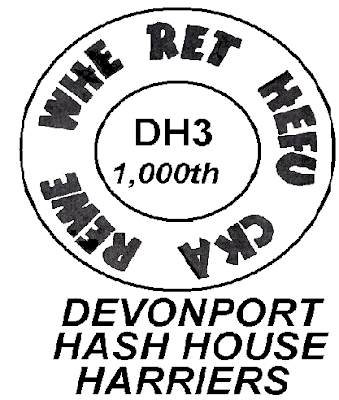 FC recently found an interesting document... It was a History of Devonport Hash HouseHarriers which appears to originate from our 1000th run (2000AD).

The publication was adapted by and added to by Graeme “FC” Gillam of DH3 on 30th April 2002 from a document prepared by Tony “Black Tracker” Morrell who also acknowledges the assistance of Chris “The Lord” Eden of H5 and Clive “The Beast of Bahau” or “Ghurkha” Olbery now resident at Swansea....

Click to have a read of it <HERE> and make sure you put it back there after you read it. 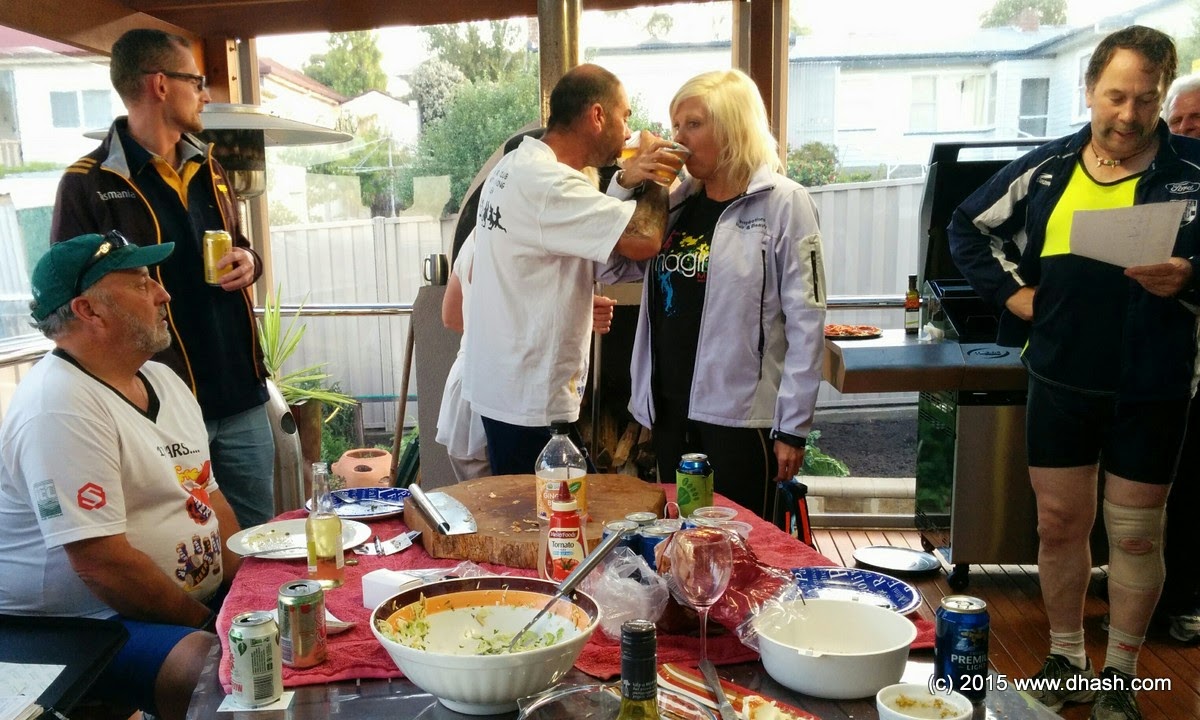 And so, about 20 hashers and 2 dogs met at the Ulverstone Rowing Club for Run 1755 on the occasion of Cheeze's 50th birthday. After a bit of an amble along the Leven River past Pier 01, the walkers ambled around and through the CBD of Ulverstone and I have't a clue where the runners went, and neither did Thrust who managed to not catch up with anybody. Guardy did the right thing and waited for her.

On On back to the place where we go regularly - this time every year for a smorgasboard of pizza prepared by Pistol Pete in his pizza oven on the back patio.  After some discussion between Bastard and Dint about who was going to do the Lip - it came down to Dint doing the honours.

Some notable numbers were;   Fanny May - 101,  GA - 246, Trakka - 1233 and Triple Top for her 50th birthday.  They say her birthday bash on the Peppermint Cruise and afters down South were pretty special. Pistol Pete also received a down for missing 52 runs. The Hub is still missing - allegedly still with Tripple Top.

Lunah Full Moon Hash is on this Thursday - meet at the carpark at the back end of Wells and Sons Latrobe at the normal time and the On On is at Mackay's pub.

Next weeks run will be at Crows in and around the salubrious premises called the Oz Rock Inn and everyone knows where that is!

Feel free to offer to host runs over the next  few months - too few are hosting too many.
Cheers
Soff
soff@dhash.com
No comments: