Bald Eagle, Cheese, Crow, Dint, F.C., Flasher, Gone Again, Guardsvan, Gyno, Lantern, Lucky Bitch, Maggie, Ratchet, Shagadelic.
Another herd of hashers gathered at the house of Mr. and Mrs. Grange at Forth for a meander around town. The pack (led by Guardy on an extra leg and fresh from a service and lubrication) limped, walked, ran down William Street and off into some distant place near the highway. Unfazed and Fish Finger were paid a surprise pastoral visit by F.C. – much to their delight as they may have been half way through a root.
Fine horse doovers tickled the taste buds of the parched hashers. Killer and Lucky’s fine food was unbelievably good and also plentiful. The feast included donuts and other treats. Debate on some of the better hash names focused on “Angry Fanny” aka Michael Taylor – so named due to his background in Cross Cuntry. This provided an opportunity for Flasher to relive his fine running career and for others to wonder what went wrong with theirs.
Crow’s rigged raffle continued. Chocolate for Shagadelic, Beer for Dint...... Unfortunately Dint was a refusal and donated the six pack back to raffledom – but more about that later. Stone’s Green ginger wine was added to by some fine whisky from Killer’s collection. Newly reformed teetotaler Maggie remained steadfast in refusing all alcoholic drinks as a means of prolonging his stellar running career and preserving his few remaining brain cells. Let Maggie be a great example to hashers throughout the World. As Crow exited F.C.’s vehicle the six pack donated back by Dint turned into a 3 and a half pack. 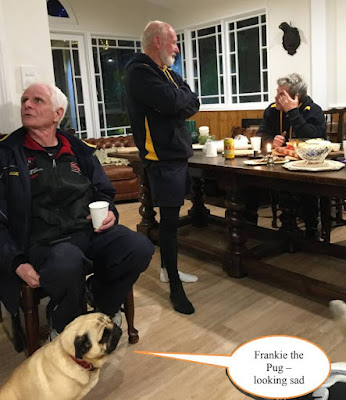