Without a Degree you are going nowhere!

It's time to be able to sit down in complete confidence with that person whom is doing the interview for the job of your dreams.

Be the best you can be with the proper credentials, education, and work experience, so employer will have nothing more to say except YES WHEN CAN YOU START.
Call one of our educational councilors with out any obligation and let us turn your dreams into reality.

Thanks to our 3 hosts Cheese, Mouldy and Smegma for their hospitality.

> A happy bunch of over 30 Santa inspired hashers trolled gaily around West Ulverstone last evening on a mild night. Many downs and everyone received a gift from Santa. Best Christmas wishes from your journalist Crab.
>
> Kind Regards,
>
> Howard Smith
> howard@cradlecoasttours.com.au
> 0407 335 925
> www.cradlecoasttours.com.au
> Multi award winner of tourism awards in 2013 and 2014. Check website!
>
> Sent from my iPhone
No comments: 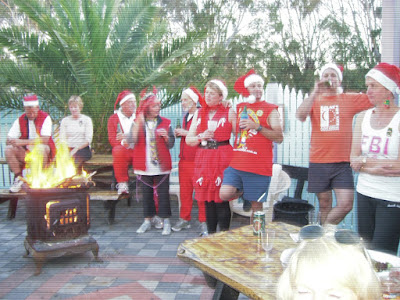 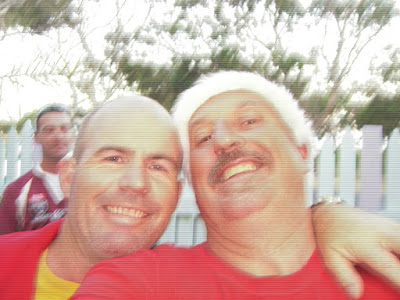 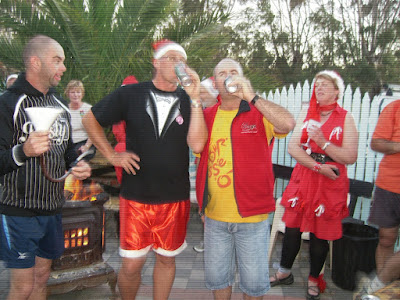 On Monday 14th December, as many as 13 or 14 D hashers ( including some B hashers) experienced what could only be described as a Cisternious run around the backblocks of Penguin. Afterwards we were all fed and watered by a scrumptious BBQ and nibblies. Downs went to most there, while the raffle prizes were won by OD, Soff and Maggie. Next Monday 21st is Cheeseburger's Xmas run in Josephine st West Ulverstone. Please bring a reasonable present for a fellow hasher that you yourself would one day be proud to show to your grand children ...On On... Crabbe☺ Photos may cum..
No comments:

I have photos apparently. So here they are: 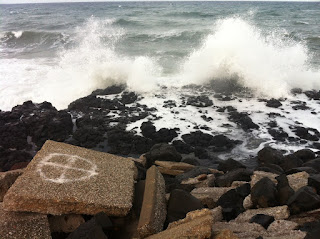 A hazardous master check. I don't think anyone washed off, but as a head count wasn't done, we can't be sure. 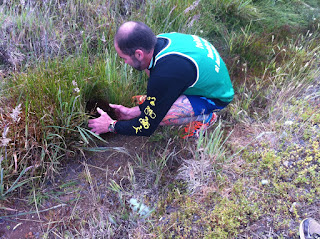 "Spot the Prick" caption by Dint. No animals were harmed while taking this photo, although the poor echidna may have been slightly traumatised.

17 Hashers faced the starters gun last night at Yep's big shed in downtown Penguin. Quite a good trail followed the rocky Penguin foreshore and wild windy waves smashed on the forbidding rocks below at times.  Downs were announced by FC and went to Yep, Dint, Cheese (for mouthing off in the Advocate ), Crab and many others. Raffle prizes of beer wine and cider went to FC, Dad and OD.. Pictures from Ewe turn will follow shortly. Next weeks run is from Cisterns, half way up Mission Hill Rd in Penguin
No comments:


About 16 or so hashers met at the River Don Railway carpark and, after listening to G.V's instructions, the walking wankers jumped into Crow and G.V's Uber vans and were transported to the traditional AGM site in Durkins Road, Quoiba. Meanwhile, the running wankers headed towards the Tiers and eventually arrived at the quarry. And you know what - the groups passed each other where they should have! And then it started to rain and everyone got really wet. And there was thunder and lightning as well.

Back at Killa's church G.V. and Killa provided the refreshments of nibblies, salad, lasagne, (prepared and cooked by the lovely Linda) and merangue and fruit. And later in the evening some port and sherry were made available. The sherry did not last long!

For a significant change, the raffle was won and won early and who won what was -


And then there was The AGM.  Tracka (being the current GM which he said he didn't know he was) said a few words mostly interupted by Cheeze.  So the nominations were -

A motley but effective bunch of Hashers there!


Then there was the Lippery conducted by the new Lip F.C. He gave downs to -

. Crow - should have ventillated the Uber vehicle before the run to eliminate various odours,

. Killa - must have spilt some of the trail flour on his new beard,

. Soff - for not paying attention with his back to everyone (someone has to take notes and Killa's church had a nice lectern).

The Hub was seen on the run but was unseen at the On On.  Because it was still in Tracka's car, he gets to wear it again next week.

And next weeks run will be hosted by Yep, from his newly renovated property near the bottom of Mission Hill Road in Penguin.

And the run after that (which will be the 1800th run) will be set by Cysten, from his 2 story mansion just near the top of the steep bit of Mission Hill Road in Penguin - entry via Long Street.

And the Xmas run will be hosted by Cheeze and his 2 dogs from his 2 story edifice in West Ulverstone.

For the 1800th run, Tracka is thinking loudly about having some significant recognition of this event. In due course he will arrange something and whatever it is will be presented to those who were at the 1800th run,  at the Xmas run at Cheeze's on 21 December. Be at both of these significant events.