Hole in the Road - near Penguin Motocross, Monday 29 December 630pm. Bastard is promising another virgin mountain there. OnOn at Pioneer's.

Run Report:
The Xmas Bash at Cheese went as expected. Good walk/run around the hood with a well catered piss stop. At the On-On well carved and cooked roasts, the occasional swearing, fighting, some fighting, sex on the tables, all was good. Santa kicked a plate with Pavlova into Crow's face was the only above the belt move Santa performed, everything else was below the belt. Plenty of people also had Santa sit on their lap, or sat on Santa's lap, depending on who's team they batted for.  No-one got hurt too badly.  Some more pics <here>.

Joke (we should have more of them again as people are starting to take us seriously these days):


While waiting to finalise their Australian residential status, two Iranian men start chatting. As they part, they agree to meet in a years time and see who has adapted better to the Australian way of life. True to their word, they meet after the year is up. The first says to the second "We have integrated so well...yesterday, I ate a meat pie and drank a VB while watching my son play Aussie rules" The second man replies "F**k off, towelhead"

Next weeks run is the Xmas extravaganza at Cheeze's fantastic and fabulous multi-story mansion in West Ulverstone - for those that don't know, it's in Amhurst St, just look for the Hawks shrine. By special request runners (and that includes walking wankers) should bring a wrapped present worth $10, and bring a plate with dessert food on it (if you feel inspired) that you would eat yourself - no crap! 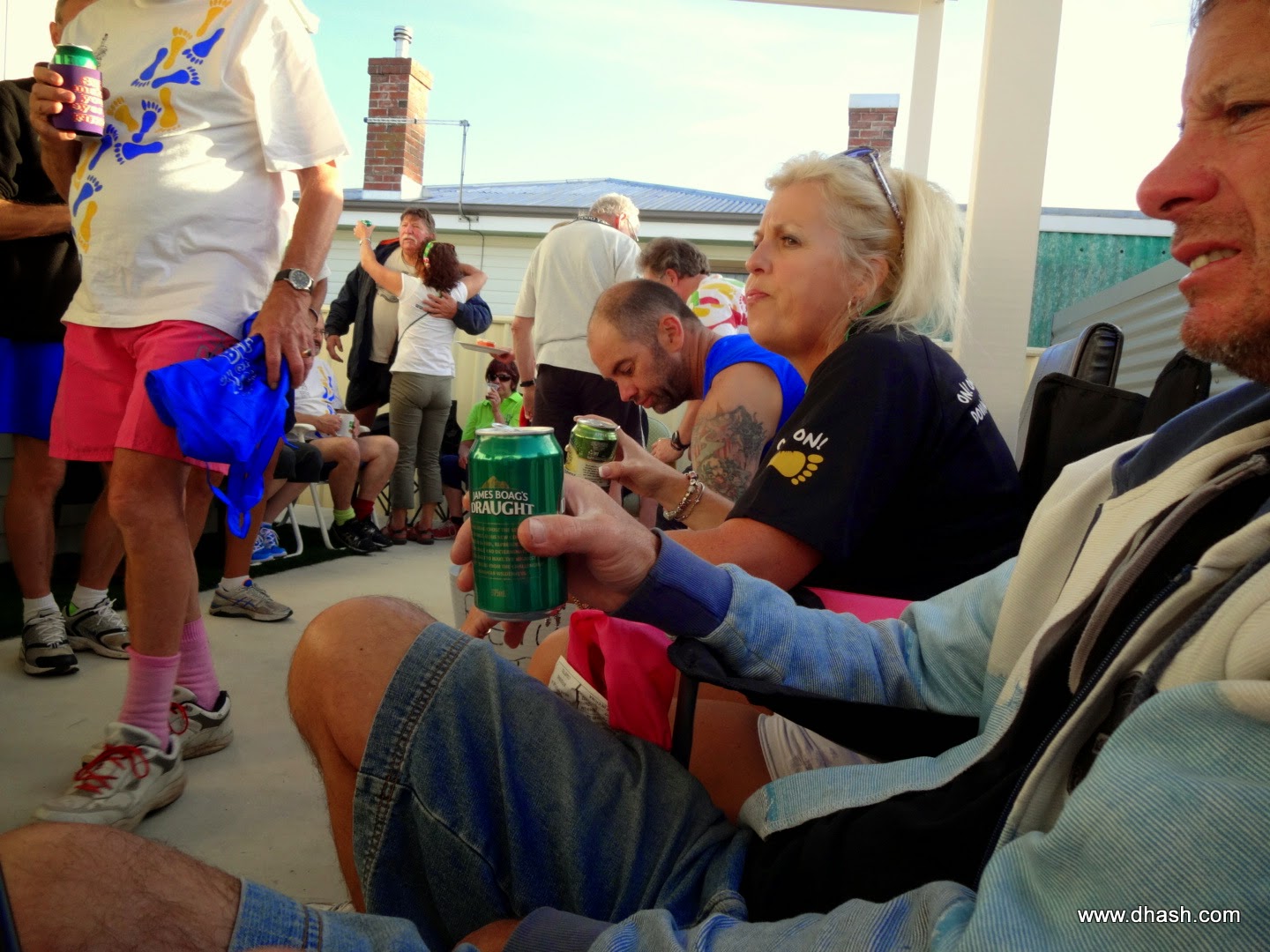 And so it came to pass that the Trailmaster was late again. This time the blame can be apportioned to Maggie who was so engulfed in building his new super duper trailer that he lost track of time. As the little red toy car arrived at the run, the runners were seen far in the distance heading south to who knows where. Well, someone must have done as the trail passed under the expressway, not once, but twice! And at the same time giving the runners a whiff of pungent odours - there was some roadkill close by but the aroma of cooking chips made up for everything. You know, I did not get to call On On not once or even twice during the run - impatient bastards.

On arriving back at the unit that Cheeze built, Bonor provided a feast suitable for a King's footman. The walking wankers made big inroads into the feast so that there was only nibbles left for the runners who arrived much later. I think Dint was able to find enough scraps.

Downs were downed for reasons which I have no memory except that 777 runs figures somewhere in it. It was especially pleasing to see Eyesore and her date for the night FDB visiting from remote parts of Qld, hear tell they would move back to Tassie if there were some jobs. They bought along a virgin hasher named Adrian and he was promptly named Rocky (I think).

Word has it that after a 2 litre cask of port was demolished, Crow (who arrived late after looking after a group of public servants who are still getting paid at Oz Rock Inn, and did not bring the hub) invited those that were left to his place for more port. Some port loving diehards accepted the invitation and were heard leaving after daylight. 1080 was not impressed with the evidence left behind!

Guardy set the run, Bonor was the host, Foghorn performed the Lip and Captain Crab spilt a glass of red on the new concrete - what a combination!

Soff - (it's not my fault that the vehicle that I am in is late!)
No comments: