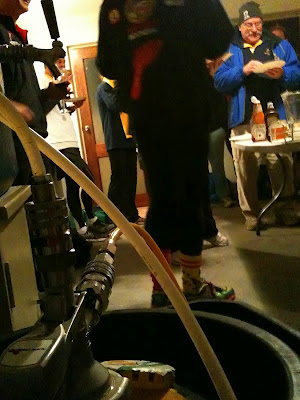 In typical Dyke fashion we had a tight, undulating run, plenty of circle checks, pitch dark running through the cemetery, the Don, past one of Dyke's druggy mate's  house. And after visiting him the Double Dutch arrows and trail confused the hell out of the non-dutch runners, but Poxy and GA saved the trail here.

Good food at Dyke's, starting with pumpkin soup followed by meat pies. And did anyone mention the beer??? Well, lemme tell you... we had a keg of GoneAgain's Seven Shed's Kentish Ale, left over from his fundraiser. Assuming Devonport Hash House Harriers would donate $1000 towards GoneAgain's ride for Cystic Fibrosis (http://www.coughing4cf.com/) he valiantly pulled out a bottle of Jans All Natural Herbal Liqueur; The Dutch Friendship drink. Despite some saying it tasted like cough mixture plenty was drunk and some even took home the printed Jans propaganda. Jans is one of GoneAgain's sponsors for the Vietnam to Singapore ride. The $1000 HHH cheque is in the mail.

NEXT RUN AT THE OZ ROCK INN. Clothing optional, Crow would love to see us all naked, especially Plunger. So be there; 630pm, 6 August 2012, Oz Rock Inn in Ulverstone.

Throw another plate on the fire!

That's right. We ran from Dint and Koff's place. Plenty of tomato sauce and plenty of flour on the run. The fire was doing well due to Dint's secret formula; plastic.  As the flames roared the dioxins, the carbon monoxide and  the furans engulfed us healthy runners. It kept the pack warm in the chili East Devonport night.

There may be a treat in store. Make sure you come if you like Seven Sheds Kentish Ale!! 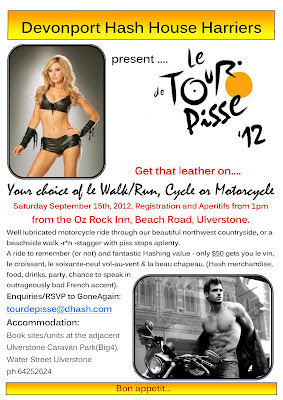 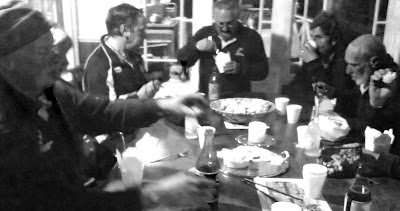 An excellent trail was laid by Killer and imitation Chinese takeaway was made by LB. Killer laid enough flour down to make a cake a mile, but the rain washed it all away. Whether he actually set a run or not we're not sure, but the brave runners said they saw some evidence of soggy flour, but the walkers saw none on the way to the pub and back.

LB's imitation Chinese food was in fact a really nice stir-fry with rice, it was just served in Chinese takeaway paper baskets and a bottle of sweet chili sauce to fool us. Cheese, fresh bread, crackers other appetisers, desert, Stones ginger wine... and a poorly rigged raffle to end the night.

Next run from Church Street in East Devonport at Dint and 'Koffs place. Bring the gas masks for the fire. Bring plenty of cash for the raffle, a hat, don't forget odd socks...


And if you want to come to GoneAgain's fundraiser at Crow's OzRock Inn you have to be quick as Rock-Star Ruth from Kenya is singing. Full house is now expected, so need to book real quick.

Click on http://www.coughing4cf.com/p/nw-tasmania-fundraisers.html to book straight away! Total bargain at $40 per person (if booking a table of 10) or $55 at the door. Some drinks and all entertainment included. Must RSVP or book before Tuesday 24 July!

Department of Shameless Self Promotion 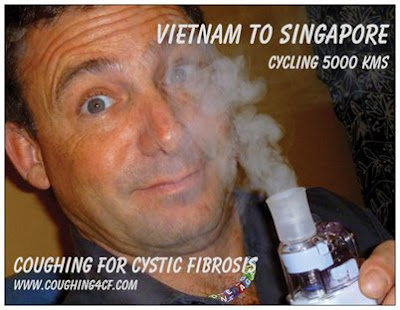 That is right folks, you may have heard it on the grape-vine,  and it is right! GoneAgain will be gone again for a few months. This time he will be test-cycling a Zoco Electric Bicycle across Asia for 5000kms (to begin with) to draw attention to his affliction; Cystic Fibrosis. And so Crow has offered his Oz Rock Inn to host a fabulous fund-raiser for the team!

As always all retailers in town have gotten together to get absolutely fabulous prizes together for raffle and door prizes, and some mega big ticket items, including a Fully Automatic Bean Grinding, Froth Producing, Capuccino maker from Cebo which we may need to put in a Silent Raffle so that someone who wants it actually gets it!

Did I hear you mumble alcohol? Well, we will be well catered for. The bestest brewer in the region has already donated a keg for us, and that keg will be sold at $2/glass. Wine will be flowing freely as well. For desert drinks we will have Jans, a lightly spiced dutch herbal liqueur dubbed the Friendship Drink. I am sure it is good for Cystic Fibrosis, and certainly will help prevent you from catching it. Special thanks to Rolf the Australian importer for organising this treat!

PREPAY VIA INTERNET  FOR CHEAPER ENTRY or BYO before 6 August!
http://www.coughing4cf.com/p/fundraisers-in-nw-tasmania.html

Go Forth and Killer

Run starts at Station Square in Latrobe (next to Wells Supermarket) at 6.30pm.
On On will be back at Tinsels place on Tarleton Road after run.
Bring the usual $$$ for run and raffle.