For those who do not read the Burnie Trash, the following is the important bit.... 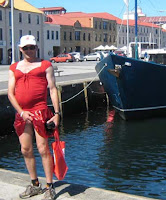