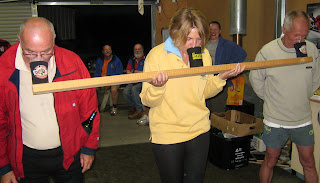 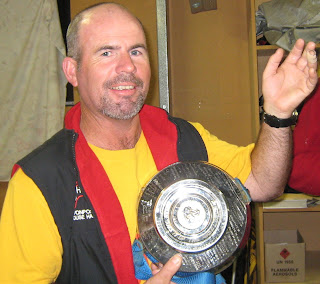 Despite a case of terminal glow in the dark lumpy sunburn, Flasher volunteered to set this week’s trail in lieu of Cheese.  Cheese had injured his hamstring playing girl sport and was capable only of menial tasks like turning the sausages and doing the lippery.  Walking the dog was out, so Giggles did that.   Portholes, Swallow and Peachy visited from the southern clubs, arriving on the Queen Mary in Devonport and catching the Trakka Shuttle to Ulverstone.  Feels on Wheels led the pack to the edge of the drained estuary until the mud bogged him, whereupon he and a fan club of clean-shoe wimps hashed around to the cricket club.  Trail begged imagination once it returned to the …in fact there was no flour to be seen and each hasher got to choose their very own scenic root home.  Thrust had hurled together a smashing spread of tucker, but failed to comb her hair, so it doesn’t count.  In charge of circle, Cheese punished the good while FC punished Dint.  Swallow took a down while Portholes and Peachy pissed on their shoes.  Mabel somehow took home the Hub on a foot fault.  After Flasher and Cheese demonstrated how lethal a humble lemon can be, we all went home.  The lemon is still in orbit around Uranus.