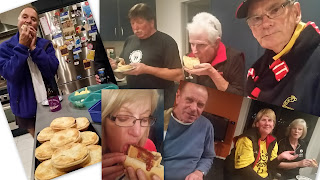 There were 16 hashers gathered for a combined DH3 and Lunah Hash and Brownlow Medal count  at Cheez's gated front gate in front of his palatial palace, eager to head for parts unknown - but were waiting for the late Maggie's Uber 4x4 containing the Trailmaster, and of course Crow.

When the On On was called, the pack found that Cheeze had set trail around and about, up and down, around and about again, and more up and down the surrounds of West Ulverstone. At least the pack only went down the zig zag steps and were able to talk to the cocky at the bottom.

Back at Cheeze's palatial palace (we were allowed inside this time) he served up traditional fare of hot dogs and really hot pies.

Dint did the lip because he did not do it last week.
Downs were awarded to -
The raffles were won and won and Soff got the cider, Foghorn got the red, and GV got the beer.

Dint organised the sweep for the Brownlow and found enough willing participants to sell all 20 tickets.  Bastard was the winner in drawing Nat Fyfe. Some Hashers actually watched the TV all the time.

Sometime during the early part of the evening, Cheeze's new sex partner Yasmin arrived and promptly found the Bean and really small shot glasses for everyone to have 2 rounds - very nice - the Bean that is. And Yasmin is too - she will get a Hash name if she is still friends with Cheeze next week. Cheeze's dogs Gracie and Ruby seemed to be a little put out for their owners lack of affection towards them now he has other interests.

The Hub is still missing - believed to be somewhere in Asia.