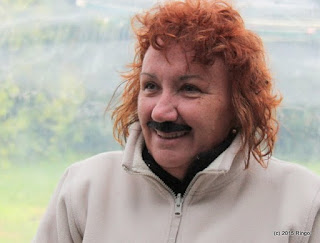 And so exactly 17 hashers of mixed decent met at the about to be called  former home of Eweturn. When all arrived at the soon to be called former home, all found Eweturn feeling unwell and being looked after by 99, an import from Burnie Hash.
Bastard set the trail for a nice walk/run around the newer parts of inland Turners Beach with the runners chasing trail over the railway line, and  back over the railway line,  and through some paddocks back to Eweturns, who by this time, had retired to bed by herself.

After another 1/2 hour or so GA finally arrived in company with his friend and 2 dogs. They actually followed the entire running trail at walking speed (ed), as GA does.

Bastard did the lip and downs were awarded to -
A new hasher brought along by GA was named Cranium, who was unable to do the down and proxied it to GA.

The Hub had returned and Dint did it proud showing it to all and sundry. The next wearer just happened to be GA in honour of his recent 50th birthday.

The biggest loser award for this week was shared between Maggie May and OverDose, both being unfortunate supporters of Carlton.

The raffles were won and won and I won won too - and so did Cheeze and most everyone else.

A piece of lost property turned up having been lost somewhere in the past. With a name like Bald Eagle enscribed on the towel sort of gave it away as to who owned it. He did wonder where it got to.

Coming events this week include Drunken Walkers at the Forth Hotel meeting at 1/2 past on Thursday.
Closely followed by Loonah Hash at the town of murals Sheffield Hotel on Friday at 1/2 past 6.

NEXT RUN: A little less closely following is next weeks run set by Bald Eagle from his garage at 25 Torquay Road, East Devonport.

And finally a cry for help - Eweturn is moving this Saturday and is asking hashers (they are the only people she knows these days) for help in getting her stuff moved to her new abode all of about 1 km away.  If you really must know, it's to Thrust's empty house just up the road and around the corner. Bring your trailer. I am sure there will be refreshments available when all is done.
OnOn
Soff

Good on ya Walter.