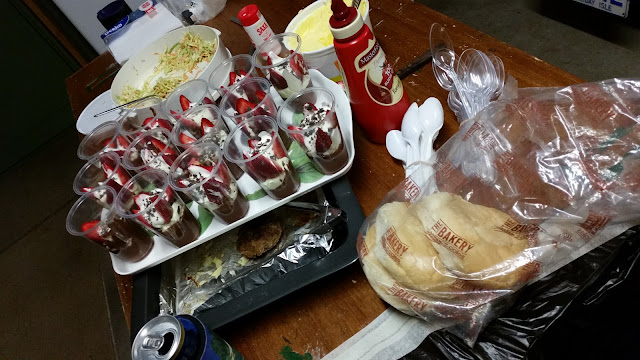 And so, 15 Hashers made their way to Eagle's garage for another adventure in East Devonport. As Crow was late again, this time his excuse was bringing 540 as 1080 was otherwise engaged, the CCC team took some time to catch up. In fact Soff did not catch up at all.

It seems the trail went over the bridge and came right back again.  Eagle did say it was short and sharp.

Back in the garage, inadequately warmed by a pissy little fan heater, Eagle served up soup, rissoles and rolls, and chockolate moose and strawberries. There was none left.

Dint performed the Lip and downs were awarded to -

GA brought along another friend (one wonders where he finds them). When asked if he had a knickname, he said he had one and it was Dodgy, so that became his hash name.

As far as the Hub goes, GA was so interested in bringing his friend along that he forgot to bring the Hub along as well. It was no contest that GA was awarded the Hub for another week.

During a lull in proceedings (Dint was eating) Eagle was heard to say "Every old person has a young person in them, saying what the f*ck happened".  And he also said the he took his MG Sprite for a run on Saturday with the hood down - jeez, what is he trying to prove!

Another piece of lost property surfaced - this time it had Bonor's name on it.

Biggest losers this week were Cheeze and Bonor - Maggie was relieved.

Raffles were won and won and everyone won won.

Drunken walkers will walk from the Forth Pub at half past on Thursday if they can!

Next weeks run will be from Valentino's in Best St, Devonport, opposite Gowans Toyota. Bring some extra cash for drinks.

And the run after that will be from Bonor's place somewhere in Ulverstone. Ah an update- its at 2/2 Wrights Road, off  Trevor St, somewhere near the Simplot exit off the bypass. We have been there before. You all remember that?

I shall wave to you all as I pass by on the Spirit of Tasmania next Monday with my motor bike and a few others doing traffic control for the cycling Tour of the South Coast - Mt Gambier to Port Fairy over a week or so.

Sometimes you wonder ...and another glass of wine tells you the answer. Life goes on!!!