And so it came to pass that 16 hashers met at the carpark behind the Spreyton School and near the netball courts.  All good except there was no netball being played.  Under the light of a nearly full silvery moon, assisted by the glow from Venus and Jupiter, the pack left the carpark and headed off.

Right off went the wankers for a tour around the Spreyton racecourse and back through the dead centre, and the runners went just a bit further, up and around Devonfield to the Function Centre and HHH'd from there.

Back at TT's garage, TT served up tomato soup, some different lasagnes, and cake for sweets. All very filling.


Dint did the Lip and downs were awarded to -
The raffles were won and won and cheeze won a prize - and it still wasn't a blow up doll.

Next weeks run will be at Preston apparently, and I say that because Bedpan has not come back to me with an address to go to. You know what a woman can be like now that Synco is around!  I guess there will be another post when we know.

Another month and another Loonah Hash. Yes - this full moon celebration will be at  Furners Hotel in Ulverstone starting at the very reasonable time of 6.30, and will be in conjuction with the Drunken Walkers.

Most of us know that Dint is on the radio. And sometimes he tells the listeners what the time is. For example, when the big hand is pointing at the 11 and the little hand is pointing at the 12 - it is not 5 minutes to 11. He actually said at Hash that he does it all the time. An another example of self promotion which he downed for last week was when awarding a prize to a listener, the listener said "you are a legend" and Dint said "I know".  And we all know Dint is a legend, for all the wrong reasons! 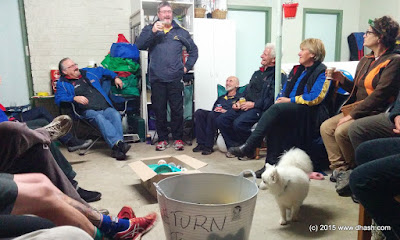