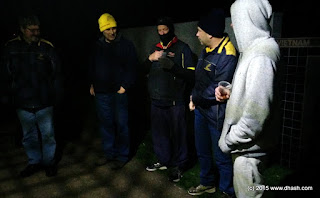 And so it came to pass that give or take 18 hashers met at the Elimatta Hotel in Devonport to celebrate the reaching of 1000 runs by Dint.

At the appointed time but 2 minutes early because we were having a meal there and did not want to be late, the trail led to the leadlight just up the road, then back down the road to the Vietnam Vets BBQ shelter, and a wander back to the pub.

But while we were all at the shelter, Tracka called for some quiet and made mention of this significant milestone for Dint. Tracka then disappeared around the back for a moment, only to re-appear with what looked like a car door off a Camira, complete with a significant dint - all this while enjoying some green ginger wine. Dint was suitably chuffed. Then everyone put their own comments with permanent marker on the door - most were kind. 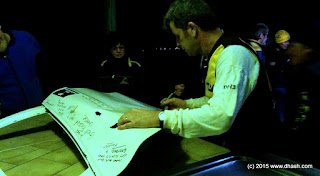 Back at the pub, hashers sat at a long table, ordered their meals and enjoyed a tab at the bar. Even Supa Sal and her sex partner Ringer were there. The only down offered was for Dint for his 1000th run and then he was only able to drink about an inch of it before passing it on to nearby hashers. It was most unlike Dint but he was unwell but it didn't stop him from being on the radio the next morning.

Other downs that should have been made were for the biggest winner (Cheeze) or the biggest loser (Soff). Cheeze really rubbed it in when, standing on his balcony on Monday morning, made rude comments to me in the public carpark below.

Gorn Again again reminded everyone of his forthcoming 50th birthday to be celebrated at the East Devonport Bowls Club on Saturday 25th July from 3.30pm

Next weeks run will be at Eweturns, 210 Eastlands Drive, Turners Beach, the day after the Burnie Hash will have been there. Wonder whether she will use the same trail? 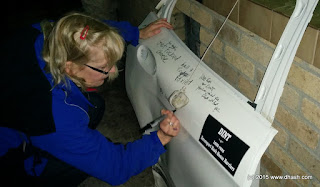 FROM FACEBOOK: It's Blue Moon time again!! No Cheeze blue or otherwise though! As 'once in a Blue Moon' we stray far afield this month we will visit "The Murials". Meet at the Sheffield Pub at 6.30 pm on the evening of Friday 31st July for Meandering, Munching and Mooning. .

Thanks to Tracka for organising such a wonderful trail, a special award, great food (I guess that's why we keep going back there), and for doing this while not feeling too good.