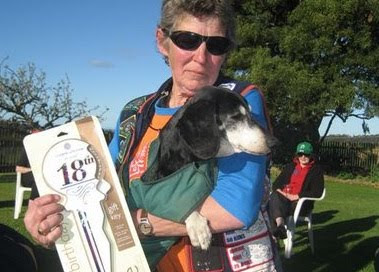 It is with a deal of sadness that we mark the passing of Truly the long dog; cat food napper, sausage dog impersonator and faithful hash hound of A Bit of This.

Truly started life as a doberman, but as legend has it hashed so much that her legs simply wore out.

Truly's 18th birthday was celebrated in October 2009 (see picture), making her approximately 85 in human years or 126 in hasher years.

In true Burnie hash tradition, Truly's passing will be marked with a Drambuie, with perhaps just a pint or two of Guinness.

Truly joins other notable hash hounds with the Cloud Nine Hash pack, such as Maverick, Fred the Transexual Hash Hound, Boo and Hamish.

A collection will be taken up to have Truly stuffed and mounted on a skateboard in an effort to stop A Bit of This scarpping off back to ol' Blighty. 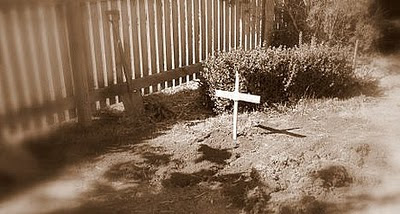 In the Valhella Moose Farm-yard on West Mooreville Road under the apple tree, nearby to Monty the cat and many other treasured pets.

"We drank several bottles of whisky last night to make sure the pain was numbed." - Dini & Ringo