Poxy's run went off without a drop of rain. We ran to the Mersey River light-house and made a dash back to the on-on for a feast. Pioneer and PB were responsible for a three course meal starting with a choice of two soups for starters, some great curry and other dishes, some from Crow's kitchen, followed by a selection of freshly baked scones... all washed down nicely with a few ales and wines. 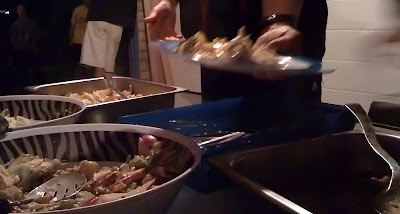 And oh, by the way, the main event: Who had been in possession of the mystery prize for the most desirable and sexy Harriette in our club. The actual winner, Prickle, kept on evading him long enough for the wrapped up mystery prize to start getting smelly in his car. It became a matter of urgency to award it. An executive decision was made and the prize was awarded to the second most desirable Harriette; Dyke. And so Dyke had the honour of receiving, and hence unwrapping the mystery prize which, many moons ago, was purchased and probably tested by Shove-it at an undisclosed location.

The run was just under 5 kilometers. Go on, mouse around on the map below...


Oh, you want to know what the Mystery Prize was? Well, hard to describe really. Looked like a normal sized battery operated flash light with a large pink attachment that resembled Flasher's penis. No idea how Dyke will explain that to his mum when he has it providing pink mood-lighting in his lounge. And no, it does not vibrate (but given the size of the thing there would probably be a law against that).

Next run, 27 April, at the Mersey Yacht Club compliments of Dint.

I thought TT and Pb did the food at Poxies run. not Pioneer and PB. I could be wrong. Soff

I might be testing you all, besides, what would I know! It all tastes darn good whenever PB is involved.