Bastard's in the Dark 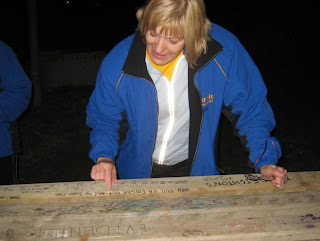 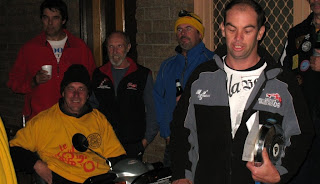 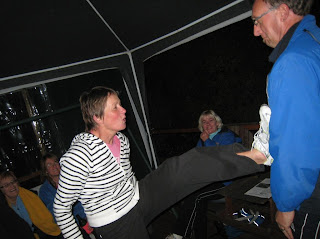 Bastard and virgin co-hare A Doodle Doo amply floured the Penguin streets on the first Daylight-Wasting-Time r*n of 2009. From an icy carpark at Hiscutt Park, the walkers and r*nners found their way on a well set trail to torch-lit Masterchecks on Mission Hill and later the Dead Centre. Last MC was atop the Knoll, where Tinsel learnt lots of local goss by reading the picnic table graffiti. Go to www.pullyourfingeroutandgofaster.com evidently.
NSW visitor Wipeout came back for another holiday but thankfully couldn’t match his last DH3 experience of broken bones, blood loss and 5 weeks on crutches. After a busy circle, Poxy Hash Lip Cheese groped around blindly for someone else to give the Hub to, but in the end it was just too easy to give it back to Dint. Mable pretended he could read by delivering a very good joke whilst holding a piece of paper. A Doodle Doo, all boned up for her holiday in Asia, showed Flasher her specially trained Kicking Box and he was, unusually, lost for words.
Next week’s trail is being set by Guardsvan from the Forth Recreation Ground.