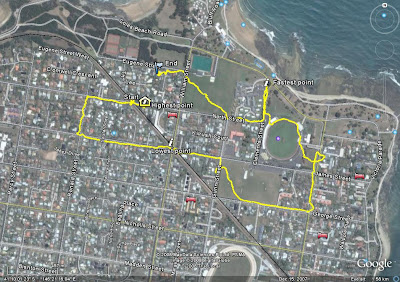 Would you believe this run was set with 215 grams of flour? I'd believe it! May not be the case, who knows for sure, perhaps there were people like there were in the PNG Goroka Hash where 'nationals' scooped up the flour to bake cakes with as they thought it was a waste! With today's interest rates and the mortgage squeeze, and the budget coming up,... well, who knows how tough some people have it.

Anyway, well done, we had a good run in the end, and no complaints about the tucker! We ran a massive 4.5 kilometers in 45 minutes, and burned just over 230 kCal which in terms of Weetbix is the equivalent of FOUR regular Aussie Weetbix WITH milk! Take note Little Fanny, Weetbix are good!

An impromptu mini after party for the Burnie Hash's benefit at GoneAgain's. He only invited the women folks because a new Hasher called Little Fanny was dragged in by Dini.. But shit, women come in different shapes, and it was not just Dini and Little Fanny from Wales, it was Flasher and Cheese and Killer and Giggles and... well, who knows who else was invading my privacy and assaulting my home-brew! 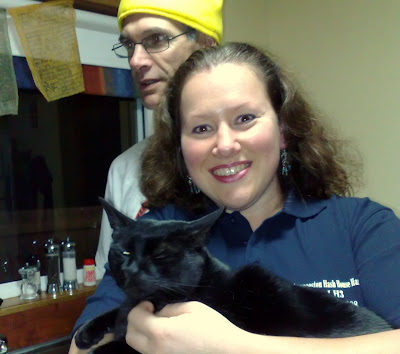 Giggles with GoneAgain's Black Pussy... If only his wife knew!
And in case you were wonderingLittle Fanny is the one with the... ahum.... well, I don't want to loose my PG rating... It is not Flasher! 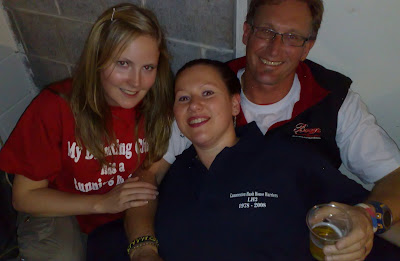 And Flasher did not have his share of the red wine which was rightfully not his after GoneAgain fairly won the Amazing Race last week!