Looking for the Wheredehellami bird 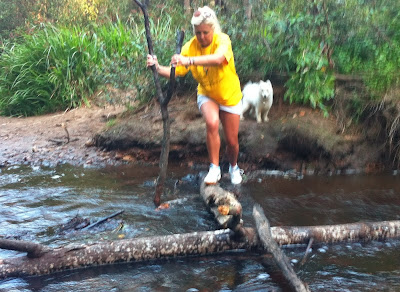 Not since I've joined Devonport Hash House Harriers have we run from this spot 3kms from Railton on Native Plains Road, so Tracka sure had us scratching our heads. Personally I can vouch for the false trails that were well marked on the walker's section, and the river crossings that left all but Highbeam with wet feet.

An impromptu shuttle/rescue service was started between the On and nearby civilisation (if you can call Railton civilisation) where most walkers got stranded in the end.

Next was the exodus to Bells Parade for the OnOn where Tinsel's kitchen had whipped up copious amounts of sausages, salads, breads and diet potatoe salad.

Two Alaskan Virgins were dragged in by GoneAgain (who keenly dragged them away again straight after the circle). They were Nurse Crotchet and Doctor Helga von Buben from Anchorage Hash. They were suitably impressed by us and we inspired them to climb Mount Murchison, Mount Roland, Quamby Bluff, and Cradle Mountain in the next few days before doing the Walls of Jerusalem in a day. Now they are Hashers we have a reason to be afraid of.


Next run from Dell Luck Park at the junction of  Waverly Road, Bass Highway and Forth Road, at the bottom end of Stoney Rise Road. Guardy will be your host.