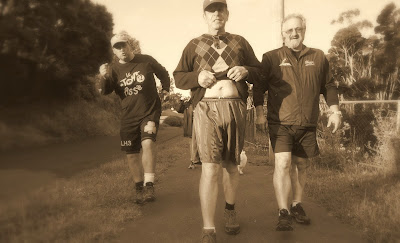 You wouldn't read about, but Guardy pulled it off. Told us all to run into the Don and rotate live Hares.
An hour later we all managed to get back to Dell Luck park somehow. Noone knew where they were going of course.

Back at the OnOn at Lantern's glorious food was served in his cave. Lantern still has one small light working, maybe next year that will be blown as well and we can have the circle in perfect darkness.

Bedpan's nursing friend was named Mattress, and the word is she likes to get stained. Being a nurse and her name being Ann, it seemed Ann-ama would've been good, but we thought we might scare her away - the last thing we wanted. We also had two other virgin runners, builders who only today arrived by plane into Devonport we called them B1 and B2 for convenience. Oh, and TripleTop only just made it back in time for the OnOn from Bon Jovi in Melbourne, the little runt.

Next run Monday 16th Dec: A Bastard of a run/walk from the Mount Gnoman car park at 630pm. OnOn at Bastard and Pioneer's - Adina Court, Penguin. Remember to pre-pay your Christmas Run (23/12/13 at Cheese's) and collect your t-shirt if you want it early for the Burnie Xmas Run