Maggie turned on a perfect night for a hash run, except for the runners and walkers trail and the food he prepared; but Dint enjoyed his one legged hobble and his tucker, enough to give Maggie a down down for being a good hare, cook and dish washer. 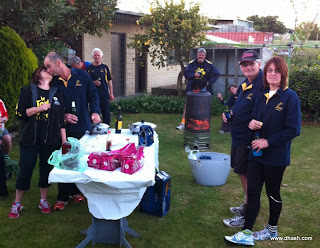 A polite crowd of about 15 turned up a Maggie’s “Secret Men’s Business Shed“ and set trail in the bush along the pathways, along the beach and to a secret church meeting place by the sea. Cheese pretended to be Jesus, stuck on the cross, Thrust said her ex husband had found God, but Garry Ablett was not around when I wanted to find him.

Some of the younger hashers, Eagle and Co set off on the runners trail looking for the HHH , but some of the old farts hashed home along the beach, only to find a creek , and bang there goes dry socks and shoes for the night.

No new hashers turned up , but old hashers in Super Sal and Ringer came, in-between Super Sal’s celebrity media photoshop sessions and their global boat buying excursion. It was good to see Super Sal weighted down with all her medals, she won at the “Gay Games” in Sydney. If she won anymore medals, the Spirit of Tasmania could have used her as a anchor.

No great nominations were called. But Dint did pull a few from his hairy arse and give Flasher a couple for being a “great “ bloke and the hub for being a C#nt. Still time to get your name to Eagle for the great position as GM. Strong people need to apply now, just to keep the riff-raff under control.

Next weeks run is at Boner’s house , 2a Tucker St . Ulverstone - near Crows place . Please eat before you hash , as Boner is a shithouse cook. Map here: http://goo.gl/maps/cRbq7