Boner set a fabulous run, his first ever and not a bad effort. Definitely beginners luck. Amazingly the rain kept at bay till we were safely stowed away under Boner's carport. He got a down down for his 22nd run (which was humbled by Debris's 44).

Boner whipped up a pretty good meal, which he managed to stretch to feed the dozen attendees. FannyMay was honoured with another pig-prize in the raffle; little miss piggy shoes this time. Bastard said he had good use for them and highjacked them. But his big prize for the night was his new favourite t-shirt (see pic above). 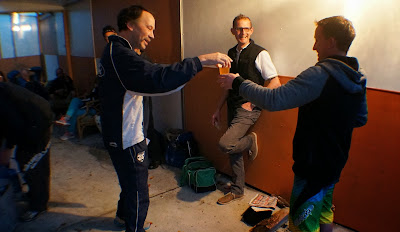 Calendar thought Boner's firewood, in his carport, was a pretty good invitation to pee and did her best not to disappoint and live up to its canine reputation so as not to be confused with a rat/cat.

Next run at Fanny May's on 18 November, 630pm. Cloths optional run as per usual, and the nude run in her backyard is compulsory after deserts. GoneAgain is back in town, so expect a good feed. Address is 10 James Street Devonport and watch out for the dog.