The air was filled with impending Thunderstorms & a deluge of rain.  But no Poxy had "Roger" cast his spell & those in the know just felt iron in the air, "Fanny May put that poker down", ahum.
Fanny May arrived just in time to find the pack & packed departing, giving her advice on the trail she had seen in reverse from the Football Club.
Those misguided Hashers set off thinking that this being the easiest of runs, leaving Poxy, Albie, Roger & Fanny May to take care of the Hash Grub.  Fanny May never seeing the kitchen before "not unlike PB" set about cooking the spuds, slicing tomatoes & cutting onions.  Poxy wondering why Albie kept appearing in the kitchen, well he was ringing the door bell!!!!! Yeah I'm a sucker, just read FB! Oops there's that terrier again, who said bone!!!!!
The pack returned to Poxy's well cooked snags, burgers, tomatoes, onions, etc.  They tucked in as they do with as much grace as at a PIG trough! Hmmmm
Dint obviously still recovering from his "Who Didn't Become a Millionaire" was absent, leaving Cheese to do the slippery lippery.
Those of us who didn't know the Hawthorn song before are still trying to forget, as every DownDown seemed to scull to the same anthem!!!!
The best ever rigged raffle came & went, wrigged as ever, "I didn't win a thing!"  Bald Eagle succumbed to Bedpan's wanting eyes & re-entered the Balinese Vase "Bong" for the ever lucky Bedpan 69er to win.  Birthday Fuck You's were sung for Thrust & Poxy, lucky for Pioneer & PB you were otherwise engaged!!!
Some thought the trail should go from Poxy's again next week as the flour "whatever" was ever noticed was still virginal.
Triple Top & Thrust did BYO  MUFFIN'S, say no more!!!
Christmas Run is the talk for the next few weeks, 16th or 23rd December, have your say NOW!!!
23RD would be at Cheese's with Triple Top volunteering for the Spit Roast, "this is still over my head" !
As for Gardy, this gave another name for B&D!!!! 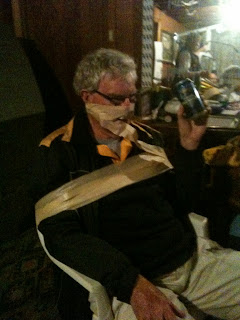 NOTICE TRIPLE TOPS MUFFIN OOSING FROM HER ??? OVER GARDY'S SHOULDER! 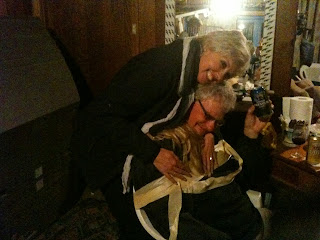