HOW FLASHER SAW IT

A small pack of 14 runners, walkers and slack bastards who just wanted to stay at the fire pot, arrived at FC’s and Ere’s place for their normal Monday night’s socializing . The fire pot was eventually started , with 2 litres of petrol and fire lighters used to get the wet wood going . The fire was well alight and hot , by the time everyone was about to go home , so at $1.70 per litre for petrol , FC was out of pocket from the start . No rain at the start of the run , but 5 minutes after everyone had left, it pissed down , so the walkers were back very quickly and the runners braved the thunder, lightning and rain to follow trail up and around the big hill , down into the city , through some bush , then back home for a very well cooked meal . The wrigged waffle again, had great Holiday items to be won , plenty of good hard earned money was spent buy the tickets , only to find they had won crap prizes, a anti smoking mask  and a very truthful t-shirt .Maggie again was lucky, and won his 88th set of beautiful beer glasses. 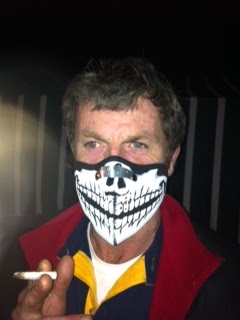 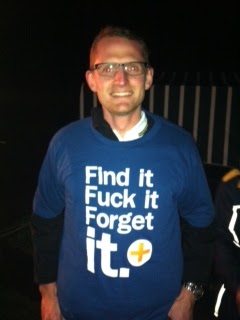 Next weeks run will be set by Flasher , starting at Ottos Grotto Ulverstone at the normal time of 6.30 ish. The On On will be at UFO’s abode at 118 Upper Maud St Ulverstone.  The following weeks run will be Brownlow medal count night at Cheeses’s place . Get the old footy gear out , dress up in your favorite loosing or drug busted team . Bring money for the waffle and the Brown medal count .
On On
Flasher

THAT IS NEXT RUN:-

In GoneAgain's Absence the Night Blind or "Blind Drunk" Fanny May is after a lift, ride, pickup, she's easy!