Hashers assembled at James St HQ expecting a good feed. Though hard to leave the safety of Fanny May's back deck, the trail master eventually blew the horn and we bravely marched out the gate, away from the kitchen smells.

The runners came to the first of many circle checks at the outdoor gym, where non saw fit to use the opportunity to bulk up. At this stage the walkers were already lagging by a country mile. GoneAgain took them by their scruffs and marched them to the Bluff where we caught a glimpse of the runners who by now had bagged the local light-house endorned peak.  As the runners disappeared with the bunnies in the dark fields behind the innocent campers, GoneAgain led the walking pack along the road to the next circle check where brushed past the runners taking off.

Alas, Dint and Mouse didnt follow the pack, they decided to scurry off into the scrubs behind the campground. Sporting a hammy injury and no torch it took Dint 45 minutes to find his way throught the adjoing pitch dark graveyard and meet the pack at the circle check 100 meters further along. By now the walkers had accepted Dint's disappearance and were just about resigned to drag Dint's prized posession (Koff) home. 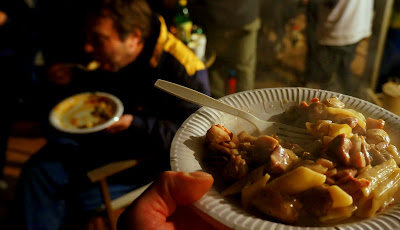 Fanny May, from HQ, lodged a panic call to GA to ensure the walkers were en-route as the runners had long returned and were about to dig into the tucker, and would no doubt polish it off in no time. At this particular point GA was proudly leading the leisurely pack down his only False Trail. With the threat of no food the pace was doubled and all made it to the OnOn safely.

Food was the usual gourmet that we have now come to expect from FM and the prize-de-jour in the raffle was a packet of sparkles. Enthusiastically the pack lit them all and watched them sparkle with excitement (see pic).

Flasher announced to the pack that his car payments from the raffle were to be donated to GoneAgain this week to see him off quicker, and donated the $100 to the cause! GA accepted them gracefully and pledged to be GoneAgain as soon as possible. 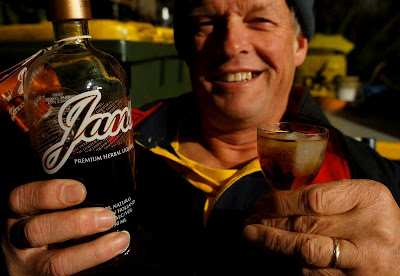 When the beer was drunk, the cask wine gone stale, and the fire pot smouldering with ambers the Dutch Jans Premium Herbal Liqueur came out, much appreciated by Poxy in particular. We toasted Dini, who appears to have gone AWOL with the rest of the Burnie crowd (except for Matchsticks!).

Next week's run from Bald Eagle's Nest in East Devonport at 25 Torquay Road.