OzRock hosted Bald Eagle's 1300th run. For the occasion he was given a drink. 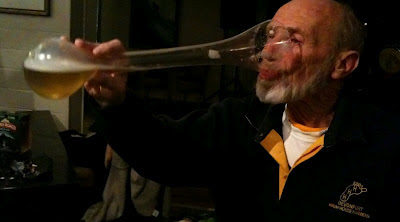 Oh yes, we also did a bit of a sprint around the block. Walkers took an hour, probably because en-masse the walkers headed off on the first false trail out the door whilst the runners, who took half an hour for the run, took off in the right direction. Anyways, a well hidden On Home under the Ulverstone Phallic was found by both packs, but not well understood by some runners who were still enthusiastically sniffing for flour as they trailed behind the FRBs.