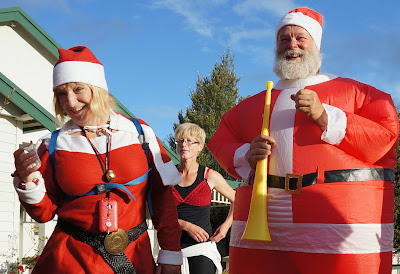 A huge turnout at Forth. As 35 odd Hashers flooded the township of Forth the 12 residents locked them selves up as we paraded up and down their Shopping Zone (according to the road sign only). Dyke was in his Naughty Santa gear happily showing off his red undies to anyone who'd care to look in that direction, and Pioneer, Tinsel and Fanny May (wearing the most adorned Hub ever seen in Hashtory) were happy to show theirs to anyone who'd care to ask. A drink stop or two enhanced the viewing.


We walked along the river to Harvest Moon HQ and visited the adjoining graveyard where inappropriate acts were performed above the watchful eye of Sir Braddon who had been resting in peace for the past 107 years.

Anyways, everyone had brought ample food and everyone drank ample of the supplied fluids. Webflash GoneAgain was testing out his new whizzbang gadget under Ringo's supervision. A jolly time was had by all.

Next run is next year and is the annual Wet T-Shirt run on January 2 from Crow's Palace in the Stone. No bra needed for this run, just bring your biggest water guns as the tourists will be armed to the teeth according to the irrelevant authorities.