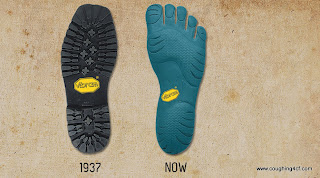 No Warrawee photos as our WebFlash was too preoccupied with his feet which were clad in five finger Vibram shoes for a secoond hash run in a row!

Good turnout for Lantern's run, last chance to run in daylight as clocks will be returned to normal before Flasher's run next week. Or was it the reputation Lantern has for gourmet? Either way, good turnout. We scambled around the Warrawee walking track for almost an hour before ending at the BBQ spot where we had a feast in the dark.

We could've been eating anything for all we knew but it smelled and tasted great. Each time we returned to the tucker-table new dishes had appeared out of nowhere. And as a show of abundance, so many pavlovas were made that one could even be spared to dunk Lanterns face in one. Most of it disappeared straight into Lantern's mouth, and the crumbs were eaten by HighBeam and GA as crumbs don't count in any diet.

PS If you are on Facebook have a look at Tassie Hash: www.facebook.com/groups/tassiehash. Just an attempt for us to use Facebook a bit better. And if you really want to annoy people, tassiehash@groups.facebook.com is the email you can use to email every member of the group!