No Muffins and No Lunch 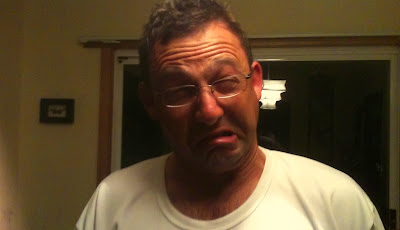 Poxy set the 5.3km run for PB, and in return PB heated mini-pies and mini-sausages for Poxy. Food was swallowed down with super-heated soup after the run. Guest appearances by Doodlebug (from Margaret River, WA) straight from the Spirit and Stormy from Warnambool . Stormy brought along a virgin who allegedly gives yoga classes to cattle for a living and rides a new1300-cc motorbike. She was aptly named Miss-Ile after careful consideration.

Fanny May tried to get in the good books by offering food to all the good looking male Hashers and was promptly told off by the female Hashers. In her clumsy defence she further admitted to the horrified Harriettes that she also makes GoneAgain lunch everyday and brings it to his work when he forgets to put it in his bag. She was promptly re-edumucated and GoneAgain can no longer expect his free lunch - see photo.

Next run set by Lantern on Monday 28th March, 630pm along Shale Road out of Latrobe. Near the pump house? Nothing much out there, so drive till you see something! Runners and Walkers both promised a short run but Runners need to bring a steam cleaner and truck detergent to get the muck of themselves afterwards. Iodine tablets optional.

And also, from Griz on behalf of Burnie:


This week's hi-methane Burnie Hash action comes from boy racer Dyke, using the time-honoured Trailmaster method of setting runs yourself rather than asking anyone else. The grid is to form up at Dyke's place, 2/64 Tugrah Road, Devonport next Sunday 27/3/11 , with go, go, go at 5:00pm. Bring a hat, mug, joke, friend, $10, raffle change and extra fuel if you expect more than one pit stop.