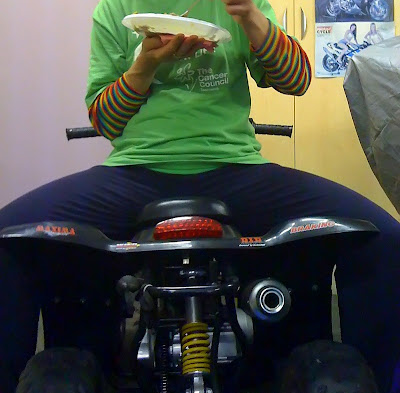 One of Cheese's posters? Nope, this is the real thing! Onya Thrust.

Walk run as per usual, bloody dark, bloody long and short at the same time, but tucker was awesome thanks to a Dini/Flasher effort - preparation of which included getting wet with a Wii apparently. Whatever it took it was worth it. Vermon in the garage was as appreciative as we were, and Cheese was not impressed that when Dint threw the spent wigged whaffle tickets everywhere there was no loose change flying around. Better luck next time. Apparently Dyke recently found $1.83 after Flasher allowed Dint a free kick at the tickets with raffle money in it .

Oh, and Who awarded down-downs for all those whose run number was a prime divisible by three. According to his logic there were quite a few.

Next run from Bastards Place: 6 Adina Court Penguin.
GA---
PS If you were wondering where we ran,... I wonder that too as my gizmo showed me <this>... I believe it is 'user-error' (must replace 'user' apparently... is that the same as driver?)