Once upon a time, last monday in fact, the prevailing King of Stoney Rise, King Lantern assembled his armies at Lantern's Shed for an assault on the Neighbouring Kelcey Tier Green Belt. When the marching orders were given the army split into two units, one heading West and one heading North. This divided the smart from the not-so-smart soldiers. King Lantern thought it was quite amusing to see half his army march up the wrong hill, and encouraged them with lots of white powder (which suspiciously did not taste like flour).

Meanwhile the Reserves, headed by Queen Thrust, arrived and took off after the smart unit, crossing the goat tracks and into the wilds of the Kelcey Tier Belt. More junctions with lengthy false trails assured the smart were divided from the not-so-smart, especially by putting false trail signs on top of lofty mountains, where the not-so-smart turned back, only a few measly meters from where the smart ones were on trail. More false trails with convincing heaps of white unidentified powder led the not-so-smart up many more hills till the smartest of them all, Prince GoneAgain was filtered out and arrived on his lonesome at the Rambo/Whimps junction (aka W/R sign). The soldier prince bravely choose the Rambo marking and walked half way to eternity to the top of the Spreyton Field Cemetery to find the war had been won ages ago. With his steed he returned into the pitch dark magic forests of the Kelcey Tier, through marshes and enchanted valleys, with his hunting beast protecting him from evil bunnies and wobblies.

In the mean time Prince Guardy had set out to locate the missing soldier prince and with the aid of modern smoke signals and fire tubes he located and rounded him up at Tugrah Road where the troops had initially disappeared into the wild. And so without any serious casualties the win was celebrated with glass canisters filled with effervescent amber fluid and a matching feast complete with pink nude crustaceans. 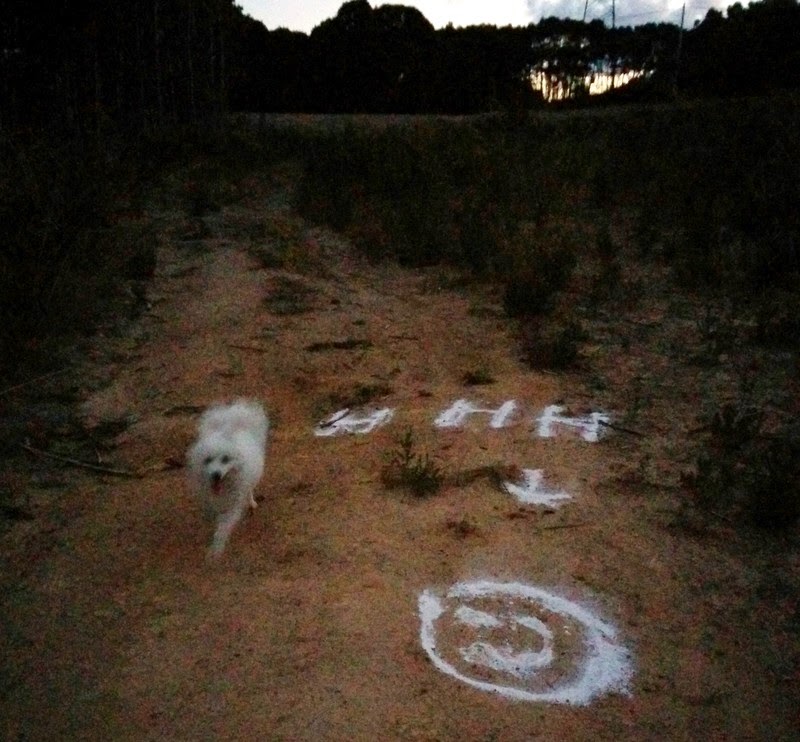 Next run, Monday 31 May we are assembling at Bells Parade in Latrobe for a proper Torch Run set by Black Trakka.