Too much is never enough

Everyone who counted made it to Lantern's place in time to catch the bus for the mystery drop-off location.

The run home was along the dirt tracks of Kelsey Tier, with Tinsel strategically peeing on the trail just as the pack came past. Torches were swapped and shared and Flasher couldn't find the right buttons to make his little light shine. GoneAgain came to the rescue after FannyMay volunteered his light to UFO who was relying on Flasher's... Anyways, the walkers made it home in one piece, but the runners didn't. Crow  tripped by a man-hole meters from the drive-way. Nurse Guardy, the rocket surgeon he is, bandaged him up. 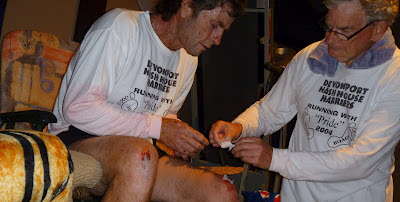 FannyMay gave her maiden lip and did a splendid job, coming up with down downs for  amazing reversible numbers some of which were reversible when you multiplied the sum of their squares. BitofThis was very impressed to sneak under cover of  winter time and actually get a nomination for The Hub! The pack howled the hub to Crow for kneecapping himself. 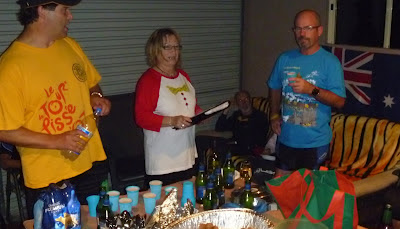 Sigh, what is in store for us next week when Dyke sets the trail from the Devonport Pool... OnOn at his place.

Don't forget next week's Burnie R*n is on 2012 Easter Saturday from the campsite of Dini at Narawntapu (Bakers Beach) National Park. The trek in will be a car ferry to save the expense of a Parks pass, and it's BYO everything. Meet at 2pm at Marana Drive intersection, for a walk up Archer's Knob (approx 2 hours return). On On later will incorporate LoonRhasH at the Shearwater Country Club, meet at 6.30pm.