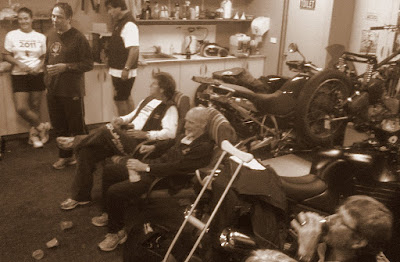 Another fabulous feed and meet at Cheese's place. Curries and cakes compliments of Dini's Award Winning Kitchen... Plenty showed up for the OnOn but many walkers only made a whimpsical attempt at the craftily set course, wasting no less then 10 minutes on the trail. The runners had a good go at it and coincided their return with the three real-men Hashers who walked (most) of the trail.

Despite the ever growing collection of motorbike's in Cheese's shed he was not nominated for a down down. Plenty of others down-downs were awarded  followed by Flasher's rigged raffle with endless fabulous prizes... Can't we just line up the prizes and beers and forget about the rigamoral of ancient customs? Nah, this is Hash, what would we do with our spare time!

Dini wore the virtual hub all week apparently and was reawarded it. Also good to see Knackers making a comeback, now that we rarely see Knockers and Knickers. Sof (seen sipping medication in picture) sported a new hip and Captain Crab was accused of misadvertising as the radio commercial for CradleCoast Tours claims he is a laugh-a-minute guy. Obviously no Hashers have experienced any of his tours, so who has the last laugh now?

Next run set by Dint from the East Devonport Recreation Centre. BYO personal protection devices, it will be dark.