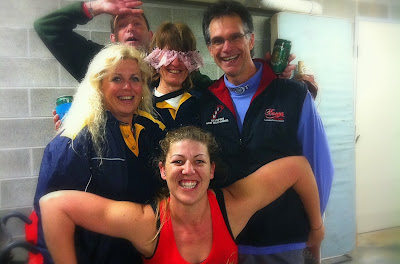 It was perhaps a first for the Northwest, a wheelchair friendly run! Accordingly we had a good turnout. Glad I wasn't dragging a wheelchair with me, as the run sure had its ups and downs. The Spring Gods took pitty and furnished us with a mild moonlit night, which we all enjoyed in T-shirts - first one this season!  GoneAgain thought he'd show off he still has what it takes, thinking that surely he could go where Feels on Wheels could go. He handed Fanny May's furball to Pioneer, bravely  slipped into his Vibram barefoot runners and valiantly coughed off behind the runners. On top of the final ascent of the run, where the HHH was, GoneAgain almost collapsed on the doorstep of 'JR', the second most competent ambulance officer of the Northwest (and incidentally the Senior Vice-President of the HACSU Management Committee) whose house just coincidentally happened to be in front of the HHH.

Feels on Wheels had arranged his garage into a virtual Hash Theatre with ample seating for all, complete with a spare wheelchair for GoneAgain who really could've used oxygen and a new set of lungs in preference to wheels. The tucker on offer was respectable and the deserts were exemplary. The rigged raffle was perfectly rigged (see Thrust wearing her new bra on her face) and no-one caught the cunning Flash out on the shameless rigging of Asian raffle prizes.  This may have had something to do with the inebriating effect of  the liberal adjudication of down-downs sternly, and unfairly, handed out by our Lip Pioneer prior to Flasher's big event.