OZ Day at Fanny May 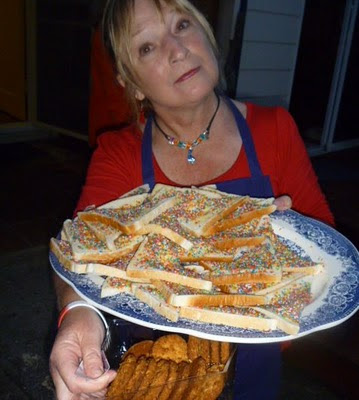 GoneAgain set a run from FannyMay's place to celebrate Australia Day! Some of us were draped in gold and green, but only one could win the prize for best costume. According to Tracka, and the decision was unanimous, Killer won the best costume prize for dressing as Albert Namatjira. 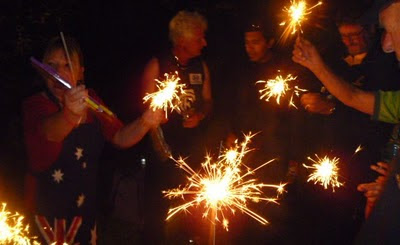 Fresh Fanny and Filthy were visitors from Townsville, the first of the grey nomad brigade to hit our shores for Nash Hash, and they were suitably impressed by our drinking prowess.

FanyyMay outdid herself by cooking up a storm which started with a mid-run serving of vegemite sandwiches and good old beer, all hand delivered and served at the war memorial by MonaLuna. The slower runners missed out as the walkers with a ferocious appetite ate them all. Back at the OnOn in James street the runners were awarded with an early serving of party pies and saveloys served so hot that they had to wait with eating till the walkers made it back. Roast lamb in rolls with gravy and mint jelly... and fairy bread and Anzacs for desert completed the tucker and a healthy serving of port was on hand to flush it all down. Fireworks and burned marshmallows on sticks completed the evening.

Next run from the Ulverstone Waterslide! Women are instructed to wear white bikini tops or none at all, and blokes can come as they wish.