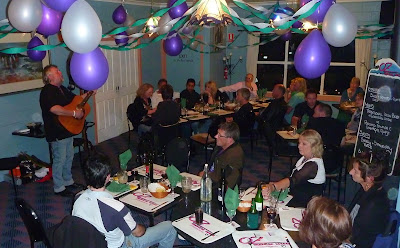 The OzRock Inn was turned into a bit of Ireland with Hashers running the show. Flasher and GoneAgain were busy accepting door entry and raffle money while Killer and others were still piling up donations for the raffle/auction to be held. Thrust at the bar serving wine and Guinness and Crow and 1080 behind the scenes preparing the gourmets.

The night got underway with Sean Roch the Western Australian Irishman from Cork belting out ballads till Flasher almost pushed him out of the way to start the rigged raffle. After Flasher's raffle started Sean barely got a chance to sing any more as the raffle went off big time! New potential Hariette recruit Rea, who herself had canvassed business for donation (!), was excitingly winning items and spontaneously auctioning them off again. Some of the loot was auctioned off very successfully.In the end almost everyone left with fabulous prizes, ranging from $5 MacDonald Vouchers to $100 Anvers baskets, and even two 30+ year old ports and a fur stola. $1400 was raised on the night, of which $700 went straight into the CF Tasmania coffers via the www.everydayhero.com.au/walter website. Whoever missed out on coming can still donate, but it is too late to win goodies!

Between the Irish Fun(d)raiser and Flasher's HOFT we sure had a good weekend's entertainment! More on the HOFT later no doubt.