Cheese's Run from his the rowing club was memorable not so much for the actual run, but for the pizza afterwards. The pizza oven was excellent, and the pizzas that came out of it were 9/10. The run was a 1/10, so that is a total of 10/10 which is a disgraceful result for a hash-run. It was Cheese's birthday apparently and he got the hub and we'll forgive him once again for all his sins. 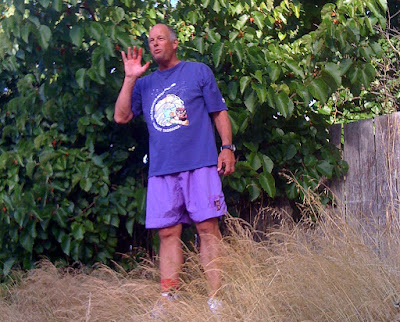 Next run is set by Dint at the end of Forthside Road, about 2.618kms past Belamy's Road turnoff on the dirt. OnOn is at Killer's in Forth (10 William Street).

But don't forget this Sundays' HOFT (Hashing Old Farts Trek) set by Black Tracka to the Alum Cliffs. Meet at the Deloraine Train park at 10am on Sunday February 7th. Bring Hat, Mug, Joke, Friend, $5, packed lunch and drinks, plus gear suitable for day walk in Tasmania (sunscreen, thermals, walking boots, thongs, gaiters, stilettos) and cash for pub meal after. Tracka also suggests bring towel and bathers (or not) as there is a swimming hole along the trail.
For those who rather ride a motorbike, some Hashers are meeting 1030am at the Caltex Servo out of Latrobe on Sunday (7 feb) to ride to Exeter and back via Mole Creek at or below the speed-limit.
And finally, a courtesy reminder for the Adopt-a-Highway chore; We are repenting for our collective sins by donning our Hash Attire and cleaning the road side on Sat. Feb 13 at 10am! Meet at the Caltex Service Station (near York Streat) East of Latrobe, drinks and barbie at 1230 if you're lucky!