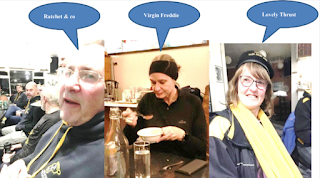 Hare Turtle aka Candle (more about that later) set a nice birthday bash from 16 Birch Street. The run was mercifully short and appreciated given the cool weather.

Ratchet accepted the hub with glee (being an active inactive Burnie Hasher). It was awarded due to his quietness – probably due to his inability to out shout others. Tinsel and Shagadelic also had downs for FINO with very cold beer but managed ok. BT was in there somewhere too but FINO.

No rigged raffle from Crow who failed to front due to work isolation. Turtle prepared beautiful and healthy food for the hungry horde following nibbles. As it was beautiful Turtle’s birthday – our hare provided cakes to celebrate. Dint received a best on ground award not for his football crap but for his dyslexic comment, “Hey Candle, where are the Turtles?”. Words fail me but a cross between a spoonerism and dyslexia akin to one of the notable exponents – FAB “I always rain when its sleeping”, “Dingo and Rinni”, “Crab and Fow”!

Dear Shagadelic had some sort of paedophile or data file problem which was finally discussed with IT expert BT after some valuable input from the uninformed. Turtle should have had an OHS down for her cleverly laid board death trap in front of her bench which tripped all hashers. Dint received a blushing crow as he performed a winning pelvis dislocating limbo under the half open roll a door as he decamped.

A recommendation to form a sub-committee to streamline the hash casual vacancy for next week due to Guardy’s unavailability was ignored. The debate only lasted 15 minutes and ended with more uncertainty but at least we now know the best chefs at all the Latrobe pubs and eating houses and how many seats are available and who has had food poisoning where and ......  Surely a bit of red tape would help the process! The upshot is that the run will be set by BT at the Hill Street Car Park in Latrobe and possibly dine on Pizzas at Killer’s business (Grange Antiques).

Pictures are suffering from time lag! 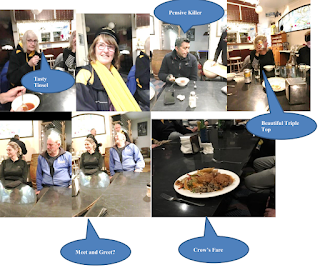