"Show us your Pink Bits" at Dint's and Koff's place 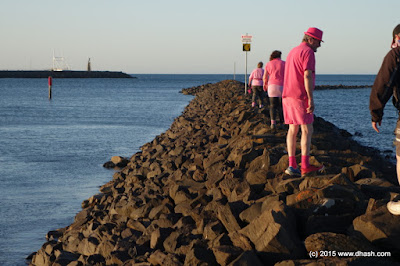 And so 13 hashers (counted by others) met in Church St, East Devonport, just around the corner from the Outlaws motorcycle Club's  Clubhouse. In fact we walked/ran past it later - we probably featured on their multiple cameras.

All hashers, except Capt Crab came dressed in various combinations of pink, GA was particulaly impressive in his "onesey"  Because Soff had pink sox on, he had to wear odd shoes to keep the tradition going. The group got some interesting looks on trail from residents and passers-by.

Dint set a trail along the riverfront and onto the seafront, then inland towards the hills, which the walkers missed but the runners didn't. 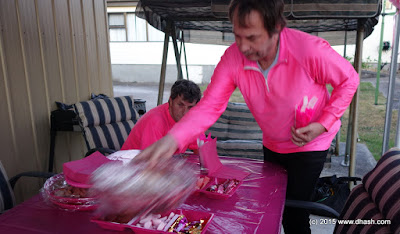 Back at the house in Church St, opposite a Church, Dint did the lip because Bastard and a few others were touring on the big island.

Downs were awarded to -

and some other multiple downs which I did not get the gist of, but Cheeze was part of it.

Koff served up on specially prepared pink table cloths and deco's, a sumptuious spread of snags, pink mash, peas and corn on the cob, and finished it all off with pink icecream and merange with pink cream. And she further excelled herself by remembering to provide port.

The raffle was won and won and run by Eagle as Tracka and TT were visiting family on the big island.  Eweturn won the cider, Capt Crab won the red, and Crow won the beer, which he might drink himself, or he might not and on sell it.

Next weeks run will be at Cistern's place on Mission Hill Road, Penguin, entry by the tradesmens entrance off Long St and up the hill.

On something nothing to do with the run, the foot of a rainbow was seen to have landed in Turners Beach the other day. In fact there were two feet and they belonged to well know Launceston hasher Rainbow, who just happened to be next to his RV booking into the Caravan Park after arriving on the Spirit that morning, All this would have been missed if I did not have my D'port hashers cap on. Rainbow came by our house later in the day and would not accept a drink, saying he was riding his scooter into Ulverstone to watch the softball. Wonder whether he caught up with Bonor (nice pic in the Advocate advertising his best bits). 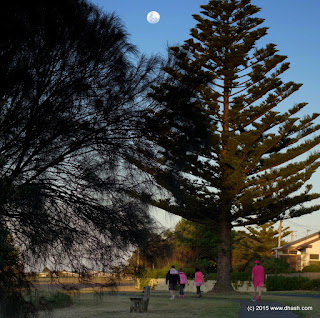