And so 20 hashers met opposite the caravan park at Turners Beach, which just happens to be Soff's and Landing's place, the Australian flag flying high on their flagpole, which was better than the Swans flag.

After someone called On On (because I was setting up the fireboxes) they all went this way and that way, all because Capt Crab parked over the start of the trail. Once that was sorted, the trail went through the  caravan park onto the beach, and followed the sand right around to the boat ramp. Maybe the ducks were waiting for a feed?

Then through the bush to the bridges, back along Blackburn Pde to the Berry Patch and a master check outside the new round tent with a hole in the top. Runners went a bit further and wankers short cut.

Back at the beachside, Dint did the Lip and downs were awarded to -

As usual, Landing provided a very special feast of savoury toast for entree's, chicken wings, meatballs, little potatoes and salads, and a very very very special sweet in a glass of jelly, custard, cream and a chocolate  bear head first into the mix.

Sometime during the evening, Flasher, Tracka and Killa arrived. They must have known of the menu.

There was some comment initiated by GA along the the lines "WHO was the skipper of the Torquay"  in a recent media release.

The Hub is still missing and we hope it gets some new engraving from other parts of the world.

The raffles were won and won and Landing won the wine, Crow won the Mexican beer, (which he can on sell), and Soff won the cider (again).

Next weeks run will be set by GV from the Dell Luck Reserve, right next to the Don River Railway. The On On will be at Killa's new aquisition of the church just up the road. It is suggested that we all walk as parking is very limited.

As usual, Crow was the last to leave, but this time Maggie was absent as he had to work at the Devonport wharf making sure we all had enough fuel for our vehicles for the next week or so.

The fires were hot, the drinks were cold, the company was great and Bedpan nearly showed her second best asset. 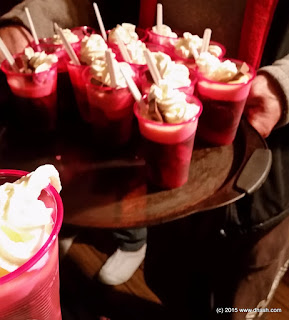