On a cold night, west of Devonport , reptiles both live and sculptured, lay waiting for a small pack of 8 hashers to attack, in the foothills of Cisten’s dad’s favorite walking tracks. The hearty group of men ventured out, Cheese, Maggie and Flasher on the runners trail: Soff,Foghorn,Crab and Poxie on the walkers trail, with Crow setting off, but getting lost and joining the other fellow animals wondering alone in the hills. Masterchecks were missed by Maggie and then he wanted to short cut home, after what seemed like a 10km uphill hike following trail. I cannot repeat the words he used to describe Guardy’s run , but he paid the price, when nominations were called , by the fill in lip ( Cheese). Wood was gathered by all, the fire lit , Guardy cooked , we all ate , Lamingtons were given for supper, stories told, with Crab saying he found snow at Cradle Mountain but people said he photo shopped his pictures , so he could get another award. BUT no honest tourism operator would do that ???.
Maggie told how the main actor , who was to play Christian Grey in the movie “ Fifty Shades Of Grey” had pulled out , and he has sent in his CV , along with a photo of his head and a lock of his hair , asking for the leading roll.
The raffle was done, again great prizes with Poxie taking away the “odd socks “red wine.
The AGM is cumming up very soon , please get your CV into Eagle, if you want to be a true leader of the pack and not just a follower. Lobby the pack now, so your name can go down in Devonport Hash folk law, get onto the Honour Roll, as   “ Head Wanker ”
Next week run will be at Crows
Usual time  6.30ish
At a “special” urgently called meeting of 3 , it was decided that the new price for attending hash will be
$15.00  inc $5.00 for the waffle or $10.00 and $5.00 for the waffle.( No Cheques) 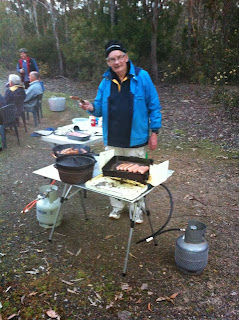 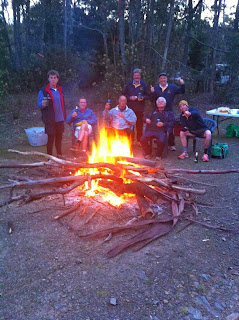 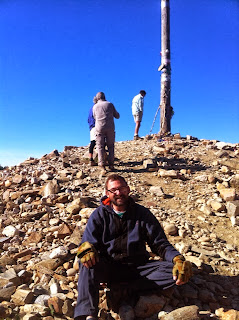 Please do not forget GoneAgain, doing it hard,  "Virtually" on his own,  Kath is still with him, Kath & GA carry their packs, the others are able to put their packs in taxis onto the next town, therefore are 2 to 3 days ahead. That is not doing it easy, it's still bloody hard.  Here he is at Cruz de Ferra the huge Cross at the pass, this is where Pilgrims leave their momentos from home, Gone Again left his Cystic Fibrosis band behind him.  If only he left his CF behind him.  Still looking for approx $400 to reach the $10,000 mark, donations can be made at:- www.give.everydayhero.com/au/coughing4cf