What set out as a normal Monday night hash run , was far from normal . Trail was very easy to find , Crow used all the left over flour, he had, from baking  the Hot Rod show people scones, so trail was good , X’s were huge, and master check’s  would have been bigger then Ben Huir , if I had found one .
Down we walked or run if you were able , some hashers were part of the elite team that completed the Burnie 10, and had to walk , but the runners took off like scolded cats up Alexander Road , like no tomorrow . Tracker and I said f*#k them, lets hash , and get back for the grub and Piss. The last we saw , the runners were at the clock . As we were nearing the surf club, the runners , came from nowhere, shot pass us like a Lighting McQueen and into Crows . Crow was hard at it with his head in the BBQ, cooked up sausages and burgers: everyone ate and drank until someone , remaining nameless, asked where the other walkers were. Nobody gave a shit , and continued eating and drinking . When the final stragglers turned up, Crow had to again go the toss out bin, retrieve some left over  salad and meat. The lippery ,  conducted by the one legged Dint , was a joy to listen too, that good was the jokes , milestones and nominations, I have no idea what  was said . The raffle was another huge Suck Cess with valuable prizes given was for a small cost of $5.00. Boner won the prize of the night , with his Huge Penis shirt. He said in his victory speech , this is the greatest shirt I have ever won, I will never take it off, I am a stud , the girls at the “whorehouse” on Saturday night will be asking to see my Huge pen and asking for my phone number . just in case they miss him, it is 0400 696 969. The bottle of wine was won by someone.
Next week’s run will be at Dint and Koff’s place  in Pardoe St, East Devonport. Please CUM in PINK as all money , raffle etc will be donated to the Cancer Council . So everyone PINK  up , get into the groove and show East Devonport all your PINK bits. 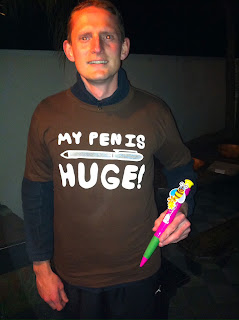