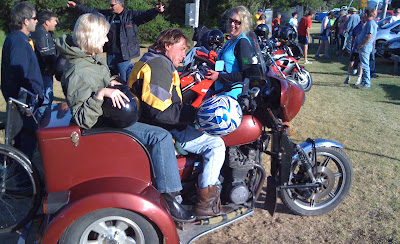 The tide was very low, indicating why Poxy loves kayaking here; in case he gets tired he can walk home knowing it is sandy and probably only knee deep.

Next run is the Australia Day run at 66 Turners Beach Road; Thrust's abode. We all wonder if she will grace us with her presence. Practise Advance Australia Fair and dress in green and gold.
Australians hang your heads in shame
Don't think we're really free
With barren soil
and wars for oil
our mindset - apathy...
Where once abounded nature's gifts
Of beauty rich and fare
Our history shows the deadly blows
we've wreaked at Earth's despair
With shameful hearts let us begin
Australia's slow repair.

Beneath our blurry Southern Cross,
we stole and raped the land,
To call it "Commonwealth of ours',
Polluted at our hands,
For those who come across the sea
detention cells to share
Then we have the hide to sing
"Advance Australia fair'.
With shameful hearts let us begin
Australia's slow repair.