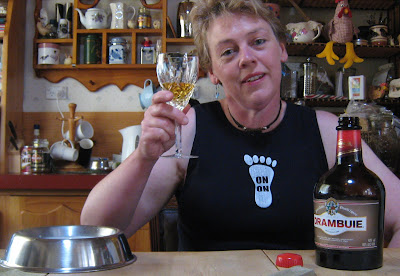 For those bemused DHHH tonkers who wondered why they were forced to sip Drambuie with the visitors from Burnie Hash, here is the story. I wouldn’t have bothered before, but now I know that at least one of you can read. (hello, GoneAgain!!!). Thanks to all those tasty leather clad lads and lassies for helping to farewell my favourite pussy – perhaps this is a tradition you may care to share?

In the early years of Burnie Hash, any Hasher whose long suffering consort produced offspring would be expected to provide a bottle of Drambuie to share in the circle.

During the eighties Drambuie was a relatively common occurrence, as the membership was copious and the young hunky Burnie Harriers (and some of the ugly ones as well) reproduced in record numbers.

It’s a well recognised offering from the Hashstatisticians that the Hashing population’s average age is increasing, even if we are still refusing to grow up.

In recent times Drambuie occasions have been virtually extinct, so in desperation the new Hash Lip of 2006 took extreme measures. It was announced that any Hasher who had a death in the family would provide a bottle of the good stuff for the circle.

The announcement was sensitively delivered at the first circle after the passing of Ratchet and Speed Hump’s father in 2006, and an available bottle of fine wine from Urang’s unsupervised cellar was necessarily substituted for the purposes of immediacy.

As it was that very same Hash Lip’s cat which recently shuffled off, it seemed appropriate for family pets to be included in the tradition.

Burnie Hash bade Monty the cat a fond farewell at Hash circle on Sunday 14th January last, and miraculously enough of the bottle remained to share this fine tradition with the stayers of Devonport Hash the following night.

The true miracle of this event is that there now exists two photographs showing Dini's eyes open.