Another adventure in Paradise run by Crab from Otto’s Grotto headquarters followed by a cleverly devised St. Patrick’s Day Irish quiz followed by chicken a salad delights. >
Despite FC gaining 10/10 due to Ratchet’s fine marking Dint fluked a win but publicity is not something Dint thrives on – just saying. The trail wound around the river and over the bridge to FINO.
Apparently, Turtle approached the HHH backwards (looking over her shoulder) so there appeared to be some confusion from the hare apparent or apparent hare. Van struggled around a short version of the run due to his much shorter pace than usual – has vasectomy scars slowing him a little.
Crab’s beautiful and long-suffering first wife assisted in delivering the food and other consumables and Cheese supplied a fine selection of alcoholic drinks. The rigged raffle was even more rigged than usual with Crow following a green theme with many trivial prizes except for the obligatory few alcohol-related ones which by chance consistently favour the Central Coast Cruisers hash subcommittee.
On account of the power blackout at the Grotto (imposed by Council) – The Indian security guards rounded up the hash stragglers before lock up (the premises not Crow and Maggie) and before they could consume all of the port – but that’s not a bad thing.
Lip Lantern performed with distinction as usual and some downs may be lost in the mists of alcohol but: Down-downs for:
Crab (Hare); FC (955 runs); Flasher (735 runs); Gone Again (405 runs); Guardsvan (1,505 runs); Lantern (840 runs); F.C. (Unleaded FUBAR)
LAST RUN: Mon 7th Mar. 2022 Hare: Crow Where: Oz Rock Inn [2105] THIS RUN: Mon 14th Mar. 2022 Hare: Crab Where: Otto’s Grotto [2106]
NEXT RUN: Mon 21 st Mar. 2022 Hare: Lantern Where: Durkins Road [2107] NEXT +1: Mon. 28th Mar. 2022 Hare: Gyno Where: TBA [2108] 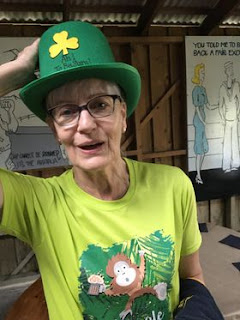 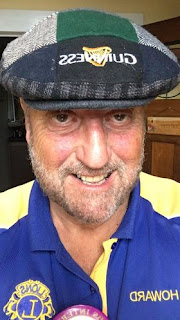