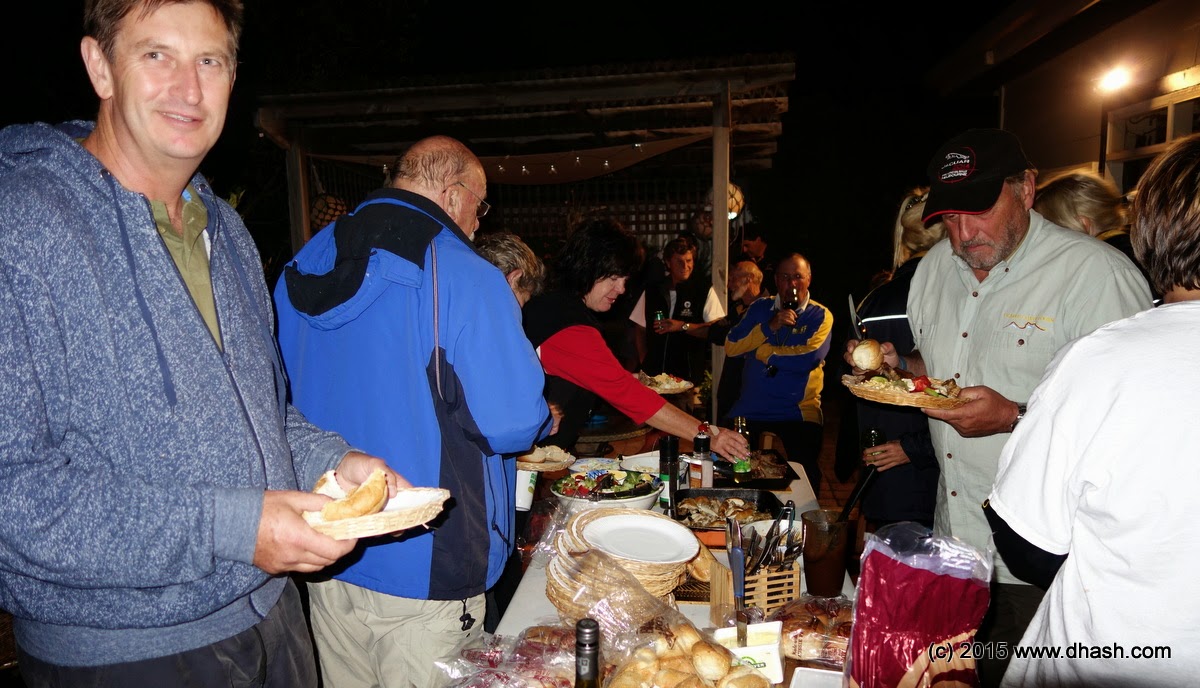 And so 30 or so Hashers met at Fanny May's  and sometimes Gone Again's place for Run 1759. It was a lovely warm evening,  just right for a wander - and what a wander it was.  Along the river, then beside the seaside, and nearly got involved in footy training in the park. It was noticed that Lantern cast envious eyes at the Army Depot when he went past.

Ratchet was called by Dint for pretending to be a runner! Deemed trivial and Dint downed.

Soff was called for not waiting for some slow wankers and cried On On before they arrived at the Mastercheck. And another for something to do with being talked about on the radio on his birthday day (he's the one with the dog pulling his pushbike along at Turners Beach).

The subject of the Hub came up yet again. And again Triple Top defaulted. We hope to get it back before she leaves Tasmania.

And why would she be leaving Tasmania you ask? Because she will be joining GA and Eweturn and Thrust and some others who don't know that yet, on his "Nullarbor - Bibbulmum" journey - riding a pushie (the bikes have batteries)  across the Nullarbor and walk the Bibbulmum track in WA spreading awareness of Cystic Fibrosis. More details at -

In keeping with Hash ongoing support of GA's awareness endeavours, Burnie Hash represented by A Bit Of This and Ringo presented GA with a fluteboard cheque of $500 (the real cheque is in the mail) during the Lip. A wonderful gesture! 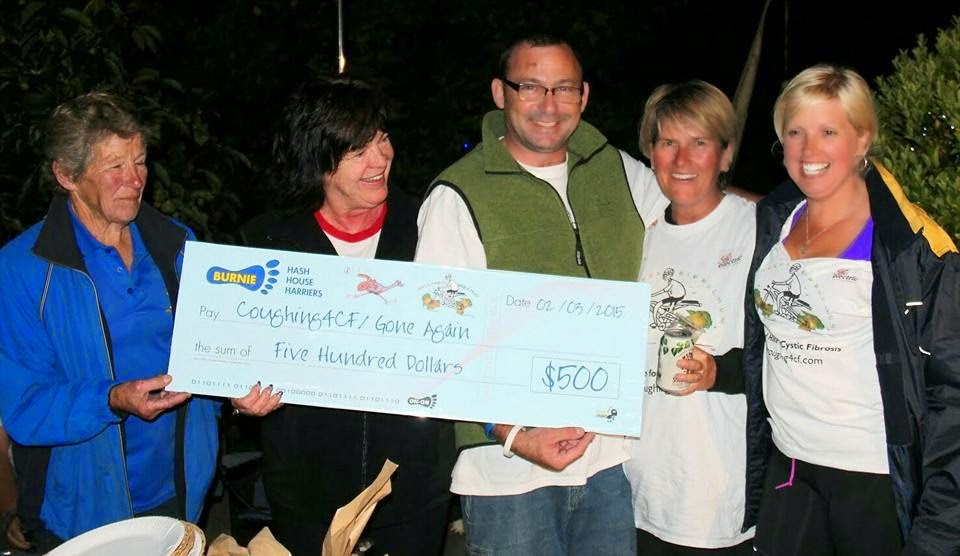 At the completion of the Lip, there being some Burnie hashers in attendance, the Devonport HHH song was sung with gay abandon.

And then Crow got creamed by Bedpan? with a can of spray cream - Crow said it does not taste the same as real cream - and he would know.

. Full Moon Hash will be at  the Top of the Town Hotel, Burnie on Friday 6 March.

. Devonport Hash will gather at Parramatta Creek on Monday 9 March with the On On back at Dint's in Church St, East Devonport.

Footnote from last weeks run at Bonors - a hasher was noted wrapping a couple of "roadies" in some clothing before leaving. You are on notice!!

A great run, with 3 courses of tummy filling stuff, and a smokey firepot which left everyone needing to wash their clothes sooner rather than later - and probably themselves as well. A fitting f*ck off for GA and we all wish him and the team a safe and successful journey.

Tomorrow is the first day of the rest of your life - get on with it!